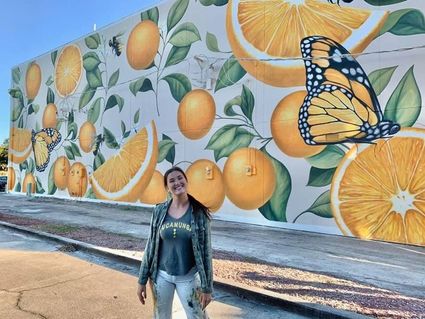 Lakeland artist Gillian Fazio specializes in "new age flora and fauna." She completed her largest project this week in downtown Lake Wales, a 3,000-square-foot mural of oranges, blossoms and butterflies.

When restoration of the One Scenic Central Building required resurfacing of the building's north wall, Lake Wales Main Street stepped up to sponsor a modern mural to replace the one depicting the area's turpentine industry from the early 1900s.

Local artist Tom Freeman, who died Oct. 1, painted the original mural at the corner of Scenic Highway and Central Avenue in the mid-1990s. It had been refurbished in recent years, but the deteriorating wall meant it needed to be replaced.

"This was a massive collaboration of efforts for Lake Wales Main Street. Murals actually have a shelf life and are meant to come and go in order to bring fresh perspective and life to downtowns," said Main Street Director Karen Thompson said. "Having said that, it was clear to us that murals can also evoke controversy because the community has taken ownership and pride in original murals."

Thompson said the new building owners, the Ellis family, "were very respectful of the situation and had faith that the replacement mural would be absolutely amazing and relative to Lake Wales."

Fazio discovered her interest in painting very young, but it wasn't until college that she learned to hone her talents into her realistic and unique style. In 2017, she received her bachelor's degree in fine art from the University of Florida and became a working studio artist, muralist and painting instructor.

On her website at https://www.gfazioart.com/ Fazio described her personal style: "The painting style I have honed is based upon layering photographic imagery rendered using acrylics on canvas or walls. Playing with perspective in each piece by combining three-dimensional beings with two-dimensional patterns, my works have flat planes and dimensional aspects.

"This takes them out of the realistic landscape and into a new space where nature and culture have a balanced and symbiotic relationship." 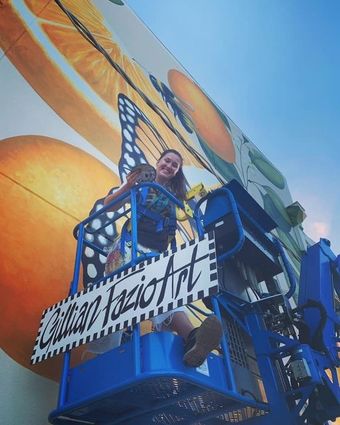 While Fazio has completed several murals, the 28 by 107 foot wall in downtown Lake Wales is by far her largest endeavor. She called it "an absolute gem of a canvas" and said "I have been able to push myself to learn and grow as an artist in all respects."

Thompson said a local merchant introduced her to Fazio's work, and "the rest is history."

"I have to say that in my entire career I have never seen a community rally around a project and this artist like we have," Thompson said. "Every time I was at the mural Gillian was speaking to someone or she would tell me stories about the conversations she had throughout the day. Cars would beep and people would hoot and holler. A number of times I heard 'we love it' and 'thank you' screaming from the cars as they drove by."