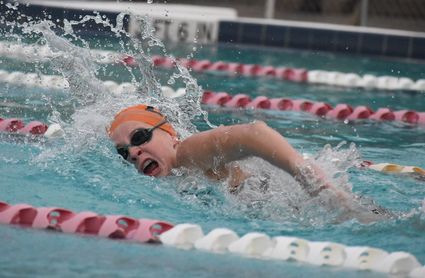 An active swimmer since age 5, Mary Leigh Hardman dreams of some day competing in the Olympics. The Lake Wales High School freshman moved closer to her goal last weekend by winning Florida state swimming championships in the 50 and 100 yard freestyle events.

"This is my first ever high school win. I'm very excited," said Mary Leigh, noting "I just knew I was going to do my best."

Mary Leigh is following in the footsteps – or swimming strokes - of her mother, Molly Magill Hardman, who was a competitive and award winning swimmer in high school and college and who at age 14 was named national Olympic Sports Festival champion. Molly swam for Clemson University and University of Florida, made it to the 1988 and 1992 Olympic trials, and was a Southeast Conference Champion in 1992. A 1985 Sun Sentinel news article called her "a baby faced killer in a bathing suit."

Now 15, Mary Leigh also grew up hearing stories from her grandmother, Mimi Hardman, about her experiences as a synchronized swimmer and swimming the Ohio River.

"I'm grateful that I was introduced to the water at a young age because if I'd never taken it up at that age I don't know if I'd ever done it," Mary Leigh said. 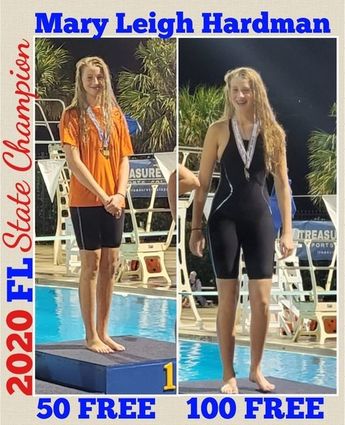 "She had so much fun, we couldn't have asked for a better high school swim experience," Molly said.

Molly noted that she was a distance swimmer, "the longer the distance, the better I was," while Mary Leigh has chosen to compete in shorter events, as a "sprinter."

High school swimmers can compete in only two events at the state tournament, but for other meets and club competitions Mary Leigh also swims in the 200 yard freestyle and sometimes the backstroke, "but not the butterfly or breast stroke."

"I'm always a little bit nervous before competing most of the time, but I'm very excited when it comes to big meets," Mary Leigh said.