LWPD Provides Gifts, Meal for 70 Local Children in "Shop with a Cop" Program 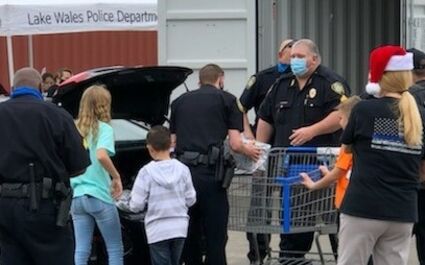 A lot was different about this year's "Shop With A Cop" event, except for one very important thing – dozens of local families will have a much merrier Christmas because of the Lake Wales Police Department.

In fact, a total of 70 area children will have presents under the tree and holiday food on the table thanks to the annual program, run by the Lake Wales Police Officers Association.

Normally, children and their families meet at the Lake Wales Wal-Mart to pick out Christmas gifts, thanks to generous local sponsors who donate to the program.

But because of the ongoing pandemic, this year families went online to reserve their gifts, or filled out a form that was returned to the police department. Then, on Dec. 12, a drive-through site was set up outside Wal-Mart, where families not only picked up their already-wrapped presents, but a 20-pound turkey and all the fixings for Christmas dinner as well.

Deputy Police Chief Troy Schulze said that while the Coronavirus outbreak altered the program, it didn't dampen anyone's enthusiasm, especially that of local businesses that help the department.

"The last two years have been more than any years prior," he said of the donation amounts. A total of $10,500 in toys were purchased, along with $1,200 in food.

"It was extremely different his year, but what we saw was it did not change the excitement of the children," Schulze said. "They were still super excited to see us, and waved and had big smiles."

Schulze said officers and police department employees missed being in the store with families, but that in the end, the same goal was accomplished.

"It was difficult to not have that emotional connection when you're with a family for an hour to do shopping, but you still feel really good about it," he added. "It wasn't the big show with sponsors and characters, but everyone's intentions were still right. We were there for the kids. That's what it was all about. "

Almost 15 years ago, Schulze had a first-hand peek at what a desolate Christmas might look like, a chance encounter that gave him important perspective on the holiday season.

"Years back, I was a school resource officer. I'll never forget, this young kid literally changed my perspective," he recalled. "It was the Friday afternoon before school was out for two weeks, he was at the bus ramp after school on the bench crying. He just looked at me and said 'Officer Troy, Christmas at my house isn't like at your house. It's just another day. I don't know where I'm going to eat for the next couple of weeks, I'm not going to have any presents. ' I was like 'man, this is a kid right here in our community'. This was a Lake Wales boy crying on the bus ramp because he wasn't going to have any Christmas." 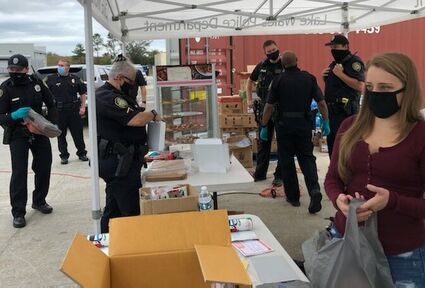 He added that many of the department's officers have had moments that mirrored his.

"You go on a call and there isn't a single decoration, not a Christmas tree," Schulze said. "So even though it was different, a lot of our employees came out. The heart of the event was still very much alive."

Families were picked by LWPD School Resource Officers in conjunction with officials from the Lake Wales Charter Schools.