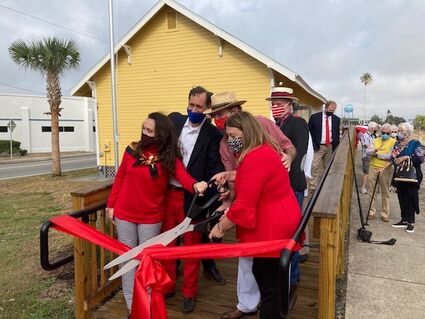 Friends and family gather for ribbon cutting to dedicate the Mimi Hardman Collections and Research Center.

Bright sunshine broke through the dreary morning Saturday, Jan. 23 as friends, family and history buffs gathered to celebrate the opening of the Mimi Hardman Collections and Research Center.

Named for the city's most noted historic preservationist, the center is located on South Scenic Highway in the newly restored 1916 Seaboard Airline Freight Station. Known for developing the historic Depot museum, bringing millions of dollars in historic preservation grants to the city and creating the annual Pioneer Days Festival, Hardman died in December 2019.

Jennifer D'hollander, director of the Lake Wales History Museum, thanked the more than 70 donors who contributed about $33,000 toward the restoration, many wishing to honor Hardman's legacy. The City of Lake Wales, through its Community Redevelopment Agency, provided close to $28,000 to complete the project.

Many of the ribbon cutting attendees wore Hardman's signature red or patriotic garb to honor the formidable community champion. Former Florida Sen. J.D Alexander pointed out that Hardman's commitment was not only to historic preservation, but also to building community connections.

Lake Wales Library Director Tina Peak read comments prepared by Deputy Mayor and CRA Chairman Robin Gibson, who was quarantining at home after being exposed to COVID-19 by Mayor Eugene Fultz, who attended a city commission meeting four days before the ribbon cutting. Gibson's remarks not only honored Hardman, but also described the city's commitment to historic preservation and the role the railroad industry played in developing inland Florida.

"Mimi did so much for the preservation of Lake Wales history and its heritage," Gibson wrote, noting he began working on community revitalization 52 years ago. "I can confidently say that today's convergence of factors means that Lake Wales is on the brink of enjoying a revitalization like no other.

"Each of our historic buildings can tell its own story. The combination of those stories can tell us our history, who we are and where we came from." 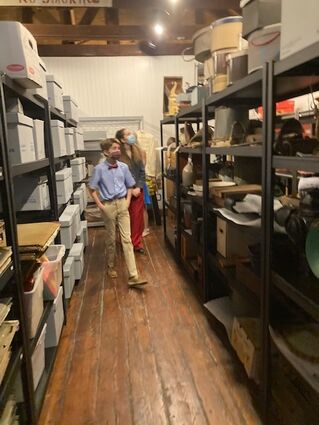 Grandson Streaty Hardman and other family members are among the first to view the stored artifacts and records.

Hardman's three children – Kelly Hardman Parker, Billy Hardman and Reid Hardman – were on hand along with many of her grandchildren, nieces, nephews and her sister-in-law. After a ribbon cutting, they were the first to walk through the center to see rows of shelving full of historical records and artifacts. Many of the items in the collection were donated during Hardman's nearly 40-year tenure as volunteer director of the Lake Wales Depot Museum.

Also to honor Hardman, the renamed Lake Wales History Museum at 325 S. Scenic Highway, now has on display many quilts that Hardman proudly collected and displayed annually. The museum is open from 9 a.m. to 5 p.m. Tuesdays through Saturdays and is free to the public.

The Hardman center will be available to the public by appointment. For more information, call the museum at 863-676-1759 or visit the website at http://www.lakewalesfl.gov/museum.