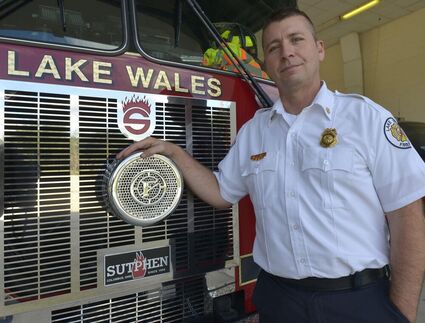 Joe Jenkins took over as Fire Chief in 2014

City residents can thank a local restaurant for helping the Lake Wales Chamber of Commerce find its 2020 Public Servant of the Year.

Lake Wales Fire Chief Joe Jenkins – born and raised in the city and now celebrating 30 years with the department – was honored with the award in late December, for not only his service as chief, but as the city's Emergency Operations Director during the ongoing Coronavirus pandemic.

Jenkins said he didn't really know what he wanted to do when he graduated from Lake Wales High School in 1988. At least not until one day he was in the mood for a hamburger.

"I walked into the McDonalds here in town and ran into a couple of guys I went to high school with that I hadn't seen in a little bit," Jenkins recalled. "I asked 'what are you up to?' And they said, 'well, we're going to fire school.' I was like, 'really? When does that start? That sounds like fun.'"

True, he didn't grow up hauling a hose around his yard, but still to this day he has a well used Tonka metal fire truck that he got as a gift as a five year old. However, he didn't take long to realize he had found a career that he would love.

After enrolling, he popped in to the local fire station to talk to some of the volunteers there. Attending fire school involved 320 hours of classroom work and training, with one big financial catch: students had to provide their own turnout gear. So he immediately joined the local volunteer department which still existed back then.

"I stopped by the station here in town. I knew some of the guys. And so I signed up and got my gear, and that was the pathway to a full-time job" Jenkins said. "I finished the course at the end of September, took the state test in October, and got hired in Lake Wales on Dec. 9."

He went on to further his education, earning an Associate's Degree in Fire Sciences from Polk State College, and then went on to St. Petersburg College where he earned a bachelor's degree in public safety administration with a minor in emergency management.

In his three decades, some parts of the job have changed dramatically, while others have remained simply familiar.

"The mission of the job is exactly the same, protecting life and property," the chief said. "The way it has changed is all the technological advances. Now, for example, if our guys go into a structure fire, each one is equipped with a thermal imaging camera, it's actually built into their air packs. When I started, we sure didn't have that. Everything is better, and we are advanced life support now, and that's a big change which is a big benefit to our citizens."

While that has been one of the major improvements Jenkins has seen in the department, with continued growth of the greater Lake Wales area, it's certainly one of the most important too.

"There's two county ambulances in Lake Wales, but they're not here all the time because there's a lot of calls and they transport to different hospitals," he explained. "If our guys get on scene now and it's a 15 minute wait for an ambulance, they can do everything the ambulance does minus transport. So they're rendering that advanced life support at a quicker rate and our average response time is just shy of five minutes. That's been a very positive change."

Jenkins was promoted to a lieutenant in the department in 1998, and to deputy chief in 2007. He appreciates that one thing that has stayed the same: the firehouse camaraderie that he still sees on a daily basis.

"The guys when they are on shift, a third of their life they're living and working with each other," he noted. "That's your second family basically, if not sometimes your first family depending on the situation once in a while."

One of those situations was in 2004, when three hurricanes blew through the city, causing major damage.

"Everywhere you turned in Lake Wales, things were broken," he recalled. "The recovery was all consuming, but the whole community worked together."

And being a good leader, in the hurricanes' aftermath, Jenkins learned the value of a simple job skill that each firefighter must still possess once they are hired.

"After Charley, there wasn't a street sign standing. So we make our guys still do it today, even with computers and GPS and what not. They take map tests, they have to know every street, every block number. They study it. It's part of their probation," he explained. "When they're ready for the test, they get a map of Lake Wales and there's not a single street written on it."

The ongoing pandemic has increased his workload and responsibility, coordinating much of the information and response within the city limits. He said it's a different challenge than the hurricanes, but potentially daunting nonetheless.

"A Hurricane, or a large scale fire, you can see those. This is fighting the unknown. It's new, it's not like we can lean on another community to ask how they are handling it. There's no playbook," he said. "We were gathering information from sources that we respected, but that information could change literally every day sometimes."

Despite that, the teamwork within the varied city departments was as important as it was impressive in making sure the people's business was still being done efficiently and effectively.

"Once we all got together – and talked about this is what we want to avoid but this is still what we need to do to achieve the goals of the city – it worked really well," he recalled. "All the city departments were amazing. I was really proud to be a part of that. To go from 'this is the way we've done it for 50 years, but tomorrow I'm going to have to do it differently,' even those employees, they just stepped right up and handled it."

The city library was a shining example of that, he noted.

"The library didn't skip a beat. They maintained a high level of service and circulation," he said. "All the departments worked on policies and we reviewed policies – how can we still provide service to the citizens but protect the employees at the same time? There's always going to be some folks that aren't happy, but we did our best and everything stayed functioning." 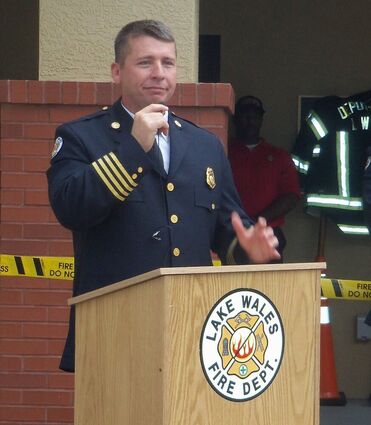 That chance restaurant get together so many years ago turned out pretty good for the city all the way around. One of the friends Jenkins stumbled upon that day was Dean Copson, now the Lake Wales Fire Inspector. Another of their classmates was Perry Daughtry, now an assistant chief in the Lake Wales department.

"The three of us went to fire school together. I just called Ridge Vocational Tech and signed up and here we are," Jenkins added.