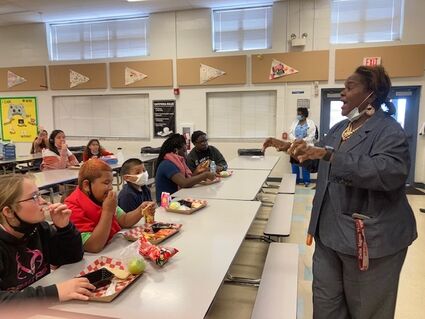 Dr. Debra Wright-Hudson is on a mission. The acting principal of McLaughlin Middle School & Fine Arts Academy is reaching out to the Lake Wales community to share the good news about her students' success.

Like the school's phoenix mascot, McLaughlin has spent the last two years rising from the ashes of an F-rating from the state. Wright-Hudson said she expects the school to soon achieve at least a C rating, and possibly be in reach of a B, while striving for an A grade.

Wright-Hudson and her team made a formal presentation April 7 to the Lake Wales City Commission, followed the next week by her speaking to the Rotary on the Ridge service club. But possibly her most important audience was a cafeteria full of fifth-graders at Spook Hill Elementary School.

McLaughlin educators brought pizza and offered motivational comments to encourage the children to do well on their state assessment tests. They also brought a powerful message that the children were loved and each was wanted to be part of the McLaughlin family.

"We're here to inspire the kids to do their very best on the FSA (tests) this year and also to let them know that we're excited for them to join our McFamily and be a part of the McLaughlin family," Wright-Hudson said. "It's really important for not only where they are here, but where they'll be next year."

Wright-Hudson's team included school nurse Linda Whitfield, intervention paraeducator Christopher Massey, 6th grade math teacher Lillian Moore, theater teacher Alexandra Meridionale and band teacher Qiana Lamb. Each enthusiastically addressed the children and described what they offered at McLaughlin. Lamb put them through a rhythm lesson with clapping and snapping and said she wanted them to join "the greatest music program in the world."

Wright-Hudson challenged them to do well on the state tests so she could put them in the various elective classes and clubs. They learned if they joined FFA they would get to work with goats, chickens, hogs and ducks. The children reacted with enthusiasm as they were told the school had drones, and they might want to explore their interests in cooking, computers, music, theater and art.

Commissioner Al Goldstein complimented Wright-Hudson on her presentation to the city, saying it was the most inspiring meeting opening in the two years he'd been on the commission. City Commissioner Terrye Howell called it "beautiful and amazing."

"We just wanted to let you know and remind you that we are one of your crown jewels in the beautiful city of Lake Wales," Wright-Hudson said.

Wright-Hudson described the school's ethnic diversity and challenging demographics: 33 percent with disabilities, 32 percent English language learners and 39 percent economically disadvantaged. The government requires the school to show not only overall increases test scores, but also improvement in each of the subgroups.

"It is important to us that we provide the students with a level of support no matter where they fall into this demographic so all students are successful," said Wright-Hudson.

McLaughlin offers a variety of student-led clubs, focusing on such things as chess, debate, art, business, books, aviation and leadership.

Two students, eighth-grader Emily Stokes and seventh-grader John Gibson – the son of City Commissioner Curtis Gibson – described their positive experiences at McLaughlin. Emily told about raising a hog and selling it at the youth fair. John shared that he is now on the A-B Honor Roll and inducted into the National Junior Honor Society.

"Before I attended McLaughlin, I had low grades." John said. "With the help of my teachers I have now made a turnaround. They take the extra time with myself and other students to make sure we are working."

School Resource Officer John Mongeon described various programs that provided boxed meals and other food to children and families throughout the community during the pandemic. He complimented local attorney Bill Ouellette for donating 50 backpacks, which are used to send food home to families for the weekend. Mongeon also said Lake Wales police officers offered much support. The school is hosting drive through community food distributions at 5:30 p.m. on April 13, 20, 27 and May 11.

Wright-Hudson also described the school's laundry service program, initiated because "We have some students who don't come to school because their clothes aren't clean."

Students in an employability program wash and return the clothes the same day. Wright-Hudson said people who want to help can donate wash detergent to the school.

To make sure students learn the importance of giving back to the community, Wright-Hudson said the school coordinates civic engagement projects. Student volunteers will participate in a free Happy Mother's Day Car Wash from 9 a.m. to 1 p.m. Saturday, May 1 at the school.

Wright-Hudson told Rotary members that the school is improving its gifted program and encouraging all students to excel. She said the teachers now have high expectations for all students. 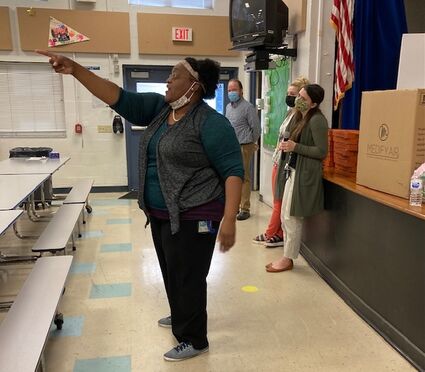 "I need a program that's going to prepare students at McLaughlin to be college and career ready. Now do I understand that college is not for everybody? Yes, we understand that. But I want to plant a seed in every one of our students that it is attainable and we're going to give you all the skills you need to prepare you and you are ready for Harvard, Princeton or Florida State (Wright-Hudson's alma mater)," she said. "Wherever God has you planted, you're going to be prepared."

Wright-Hudson praised her teachers and staff for all the extra work they have done during the pandemic, which has caused them great stress. She invited prayers for her students and staff.

Wright said the school's failing grade in the past resulted in some parents choosing other options, but she is working to make sure the community recognizes how the school is turning around: "There's a new era. Like the Phoenix, which is our symbol, we're just rising from the ashes. It's a new day, new birth. We're here and we're not going anywhere. We want to serve the students of McLaughlin."