Approved Pilot May be Expanded to All Officers Interacting with Public 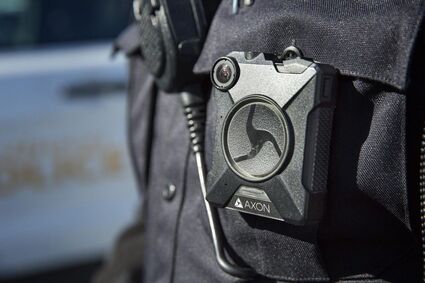 City Manager James Slaton is recommending the purchase of 24 additional body cameras for a total of 32, which would make them available to all officers who regularly interact with the public. Now six months into the city's annual budget, Slaton said he is comfortable that without dipping into reserves the city can afford the $110,350 needed for the equipment, software, licensing and cloud storage and funding a police staff person to manage the video evidence.

One of the strongest proponents of police body cameras is Commissioner Curtis Gibson, who will be leaving office the evening of May 4 just before the vote: "I am thrilled with the opportunity to fully implement the cameras and hope the new commissioners will fully support this program. Body cameras not only are good for the public but also protect our officers, because they document an entire incident."

The vote will be among the first for new Commissioners Kris Fitzgerald and Daniel Williams, both who expressed support for police worn body cameras during their campaign. They will be installed at the beginning of the May 4 meeting to begin three-year terms.

Deputy Mayor Robin Gibson at a commission workshop April 28 said law enforcement incidents throughout the country over the last two to three months helped him overcome his reluctance: "It's almost like you've got to have then. The expectation is that they are there."

Noting that Lake Wales will be the first police agency in the county to implement police body cameras, Slaton said "In a lot of ways we're trendsetters here in Polk County."

About a decade ago when Herbert Gillis was police chief the city had a small number of police worn body cameras, along with dash cameras in police cruisers and cameras on tasers, but Police Chief Chris Velasquez discontinued the program.

Now Velasquez says he welcomes the cameras, while acknowledging full implementation will require special training and practice so officers automatically turn them on whenever they are interacting with the public. He said he wants cameras to come on automatically when police vehicle lights are turned on and when a firearm is taken from its holster.

Training begins May 27, and Velasquez said the program should be fully operational sometime this summer. The city will need to coordinate with the state attorney's office and develop policies and procedures and some guidelines that protect privacy when officers are inside someone's home.

Commissioner Terrye Howell, also a strident advocate for the body cameras, said a strong policy and consequences for any officers who turn off the cameras when they should be recording, will be important to the credibility and success of the program.