Damien Moses Looked for Greatness in Every Child The Lake Wales Charter Schools and the local community are mourning the passing of Dr. Damien Moses, principal of Bok Academy South.

"It is with our deepest sorrow that we inform you of the passing of our beloved principal and colleague, Dr. Damien Moses," said Superintendent Alricky Smith in a July 23 email announcing Moses' death. "Dr. Moses was a pillar with the Lake Wales Charter Schools system serving since its inception."

In addition to many friends and professional colleagues, Moses is survived by his children, Damien Jr. and Karen, and his wife Melissa, who teaches at Polk Avenue Elementary.

In his Linked-in profile, Moses described his personal philosophy: "I am an educator that believes there is a greatness in every child and it is our job as educators to cultivate that greatness."

Bok South parent Megan Gillis, who served as president of the school's Parent-Teacher Organization and its School Advisory Council, was shocked and saddened by the news. Her older two daughters, Jillian and Madison, attended Bok South and youngest daughter, Haiden, is still a student there.

"Dr. Moses was an incredible principal. He poured his heart and soul into the school, and to every child, parent, staff, member and volunteer who walked through that door," Gillis said. "He has made a big impact on our children and community. He will be missed and never forgotten."

Gillis said Moses was given the gift of speech: "He could talk to anyone. One of the blessings of that gift of speech was his excitement for education. He could make the room excited and you could feel his passion. He loved every aspect of Bok Academy."

Moses' death was a personal as well as professional loss for Lake Wales High School Principal Donna Dunson, who shared a close friendship with Moses for more than 15 years.

"Damien Moses was more than a colleague, he was a great friend that I adored," Dunson said. "For 15 years, we had amazing conversations that could shift from serious issues to great laughter in a moment.

"His intentions were pure and his heart was huge; that man loved his family and his Bok family - no doubt about it. Moses was a remarkable educator who left his unique mark on the shores of Crooked Lake. So many educators will always hold him close as they begin a new school year."

Moses was raised in Orlando and after graduating from the Orange County public school system he attended and graduated from South Carolina State University with a degree in education. He furthered his education at Life University in Marietta, GA, receiving a master's in Sports Health Science and an Educational Specialist Degree in Educational Leadership from Nova Southeastern University. In 2017 he earned his Doctor of Education degree in educational leadership and administration from Capella University.

Moses also served as adjunct professor at Polk State College, where he said he "received outstanding reviews from my classes due to practical, highly engaging, and inspirational instructional strategies." 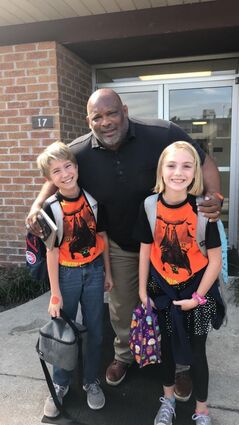 Moses was a standout scholar-athlete at Dr. Phillips High School in Orlando, playing in 1987-88 on the school's first football, track and field and weightlifting and earning 33 scholarship offers. On the gridiron, Moses played both sides of the ball as an offensive guard and defensive tackle, earning All-Orange County, All-Central Florida and All-State honors. He also was a medal winner in the shot put, with his 55-foot, 2-inch throw holding the school record for 22 years. As a 219-pound weightlifter, Moses' 285-pound lift in the clean and jerk competition was only matched once in 29 years.

At South Carolina State University he was named team captain and lettered in both track and football and continued to excel at both, earning conference championships in shot put in both indoor and outdoor competition. On the football field Moses earned All-MEAC Conference as well as All-American Defensive Lineman (SBN) honors and in 2007, he was named to the South Carolina State University "Bulldog Centennial Football Team."