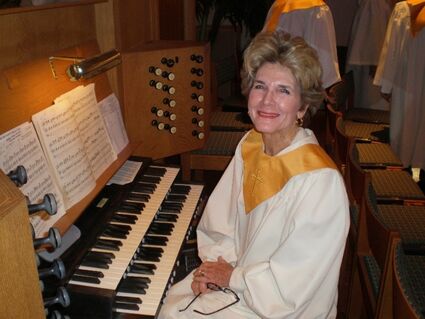 The congregation of First United Methodist Church will celebrate Caroline Reddick of Lake Wales for 50 years of faithful service to the church and to God as Church Organist with music and singing during 10:30 AM worship on Sunday, August 29th, 2021. The public is invited.

"For 50 years, we've been blessed that this dedicated servant of the Lord has contributed her sizable musical gifts to the glory of God right here in Lake Wales," said Pastor Robinson. Especially, she said, on such a unique instrument.

The Frobenius organ, from Copenhagen Denmark, was installed in the church sanctuary in 1986 and is one of four in the United States. The organ has 30 ranks, 3 divisions, 2 manuals, 29 stops, 25 registers. The inaugural concert was held on May 18, 1986, and was played by the late Carlo Curly, World Class Recitalist.

The United Methodist Church is a global, Protestant Denomination, 12 million members strong with historic ties to John Wesley, an Anglican priest. In 2016, First United Methodist celebrated its centennial anniversary of ministry in the Lake Wales community. You can find us at fumclw.org.