Many Decide Their Next Vehicle Will Be All-Electric 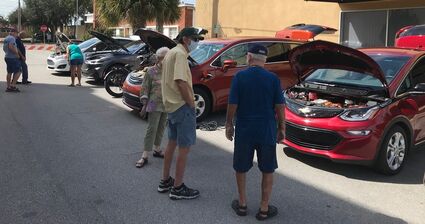 Lake Wales electric car enthusiasts shared their stories of success with interested visitors at a special car show Saturday at the MarketPlace in Lake Wales. An all-electric Mustang Mach-E seemed to be the hit auto, based upon the reaction of visitors.

"The best thing about these cars is that there's nothing to maintain," said one visitor to the show ,. "They don't even need an oil change, because they don't use oil, so there's no oil pump, no spark plugs, no fuel filter or injectors..."

In fact, the new electric models also require no transmissions, water pumps, radiators, exhaust systems, mufflers, or scores of other parts prone to breaking down.

"About the only thing they ever need is topping the fluids," said an exhibitor identified only as Rick of his wife's new Mustang Mach E. 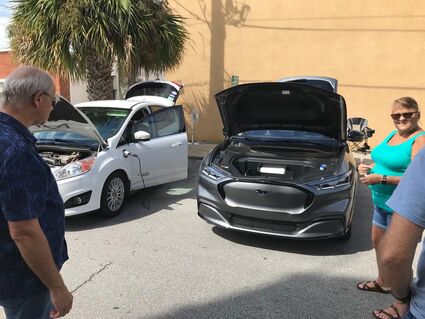 Most global manufacturers, including Ford, Volkswagen, and Audi, are converting their production to all-electric vehicles. Some expect to offer only electric during by 2030. The conversion poses a challenge to governments at every level, who are expected to support adaptation by installing charging stations in public spaces. The City of Lake Wales is being challenged to include ample charging stations in the Lake Wales Connected plan that will revamp Park Avenue and First Street during the next two to three years.

"We manage to charge ours at many locations using our own charging cord," one driver said. "We can plug in to any 110 outlet."

Other vehicles on display ranged from a compact Chevrolet Bolt to a full-sized Chrysler Pacifica plug-in hybrid.

The show was part of the National Drive Electric Week events happening in cities across the US. The show was held in conjunction with the Lake Wales Farmers Market. Sponsors included Wells Fargo, Nissan, the Sierra Club, the League of Women Voters, and the Polk Democratic Environmental Caucus.