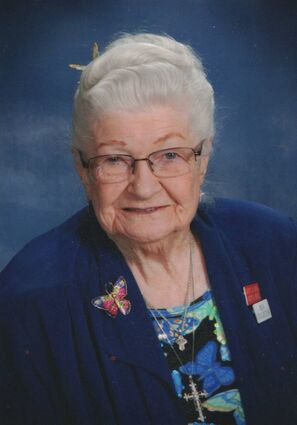 Part of the Greatest Generation, Edith married during the Great Depression and was part of the women's wartime workforce known as "Rosie the Riveters." She worked as an Army Inspector in a defense plant that produced 90 and 105MM shell casings for the war effort. In June of 1944, with 2 small children, she drove to Florida from Pennsylvania to be with her Army Air Force husband, John. After the war, the Harts lived in Alva and later Immokalee, where Edith held various jobs in the school system. In 1951, they joined the Baptist Church, and Edith remained an active lifetime member of the denomination teaching Sunday School for 50 years. She also was active in a local Nursing Home, teaching a Bible Study weekly.

Edith worked as an office manager for both a manufacturing plant and a major retail store. She and John traveled throughout the U.S. in an RV visiting 49 of the 50 states, and twice to Alaska. They moved to Lake Wales in 1994 and became active in the First Baptist Church. Twenty years ago, Edith began a "Hugging Ministry." She wore two pins at all times. One pin read "Hug Collector" and the other read "Give a Hug Get a Hug." Her goal in life was to share God's love wherever she went, and it did not matter who it might be, or their station in life or their ethnic heritage. If they would accept the hug, Mom would plant one on them...she became known as the "Hug Collector". She will be missed, but we know she is in Heaven still hugging!

A service of celebration will be held 10:00 AM on Oct.23rd at the First Baptist Church, Lake Wales. Per Edith's wishes, please do not wear black to the celebration.

In lieu of flowers, gifts should be made to the Baptist Children's Home, in care of First Baptist Church Lake Wales.