"The Last Roundup of the Guacamole Queens" Opens November 5 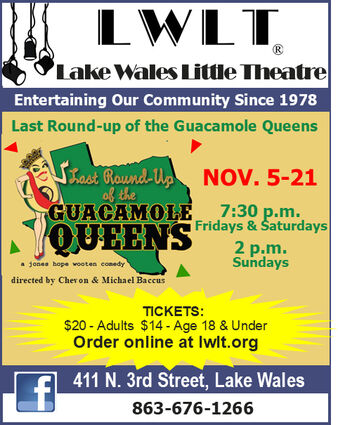 Ready for some laughs to brighten up your life? Well, Lake Wales Little Theatre is ready for you, offering a three-weekend run of a comedy that seems guaranteed to make you chuckle, or laugh out loud.

"The Last Roundup of the Guacamole Queens" opens Friday, Nov. 5 and offers what Dramatists Play Service describes as a "Southern-fried comedy. The play was written by the trio of authors of the popular "Red Velvet Cake Wars," presented in 2012 at LWLT.

Directed by Chevon and Michael Baccus, it's the final play in the Verdeen Cousins Texas Trilogy by Jessie Jones, Nicholas Hope and Jamie Wooten. The 12-member cast of Guacamole Queens promises a wild ride and plenty of laughs, according to Michael Baccus.

"The cast is really clicking, and their talent is nothing short of amazing. Fast and physical with multiple costume changes, the play is challenging, but the performers are rising to the task," Baccus said. "This is one of the funniest plays we've ever produced, so we expect a full house for most performances. People should order their tickets and choose their seats right away."

Longtime LWLT volunteer Karen Fewell will serve as stage manager, while LWLT Board President Terry Higginbotham will handle lighting and Board Member Michael Baccus will design and run sound.

Volunteers are still needed for set building and backstage crew during the performances. Interested people can call the theatre or email [email protected] 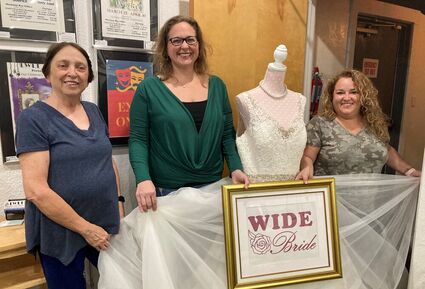 The Verdeen cousins, played by Dorinda Morrison Garrard, Holly Murren and Micky Caban, are the owners of Wide Bride, a bridal shop for Texas-sized brides.

According to the Dramatists Play Service description, "the Verdeen cousins of Sweetgum, Texas – Gaynelle, Peaches, and Jimmie Wyvette – are up against the clock as they frantically attempt to produce the ultimate high school reunion before the old building is demolished, but they've got a bushel of obstacles to overcome before they can pull off this miracle: Gaynelle is reeling from the humiliating demise of her loathed ex-husband; Peaches' romantic life has tanked because the older her dates get, the more horrified they are by her job as a funeral home cosmetologist; and Jimmie Wyvette is trying to live down her on-camera catfight with a local televangelist.

"To top it all off, the cousins have got to impress a governor's aide with their party-planning capabilities, so that they can nab the plum job of throwing the governor's birthday bash – and keep their business afloat. Their scramble to prepare the perfect event is interrupted by the exploits of their beloved Uncle Aubrey, who is in danger of getting throttled by the two octogenarian sisters he's simultaneously romancing, and by the threats from their self-righteous Aunt LaMerele, who is determined to be crowned the final and forever Guacamole Queen of Sweetgum High. And that's before one of Peaches' former classmates arrives with a malevolent hand puppet and a score to settle, Jimmie Wyvette hogties the sheriff, the high school gym is blown away and the desperate battle for Guacamole Queens heats up into an outrageous fight to the finish."