By Diane Rado and Robert Connors 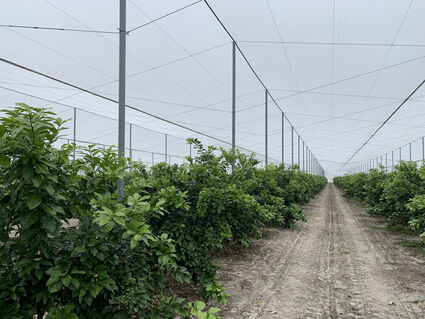 Some 25 years later, the citrus forecast shows much lower numbers.

Citrus greening, also known as HLB or Yellow Dragon disease, is caused by an imported bacterial infection spread by the Asian citrus psyllid, a tiny wasp-like insect. It is now found in groves around the world. The citrus plague struck the Lake Wales area, the heart of Florida citrus production, more than ten years ago with devastating effect.

After arriving in south Florida in 2005 greening quickly spread throughout the state's citrus zones, slashing production by about two-thirds, from 240 million 90-pound boxes a year to a little over 70 million boxes. It has also infected the industry in Brazil, which at one time seemed poised to replace Florida as the source of most orange juice.

"The crop estimate isn’t a surprise and shows the toll Citrus Greening has taken on the Florida crop and our grower members," Florida's Natural Growers said in a statement. "We will continue to supply a quality product to our customers and are committed to the Florida’s Natural Brand and to supporting our grower members." Lake Wales-based Florida's Natural has emerged as one of the top producers of "single-strength" or not-from-concentrate orange juice. They also produce a number of other food and juice products and beverages.

While the industry has struggled to find solutions, one grower in the Lake Wales area has achieved remarkable success. Ed Pines has developed about 400 acres of citrus under screens near 80 Foot Road. His company, Precision Citrus, has emerged as a leader in the technological solution. The screens prevent the psyllid from entering the groves to infect the trees.

"The solution is to eliminate the vector," Pines told the LakeWalesNews.Net. "As more people come to Florida we will have more pests. We need to find ways to use less land, less water." Pines says that his young trees, only two years old, will be in full production next year. "They grow much faster, two to three times faster, and use less water, less pesticides, less fertilizer," Pines said. "We're expanding our project," he added.

Pines is one of the few growers who have offered truly upbeat comments as many struggle to maintain existing groves. Numerous small-scale growers have given up. 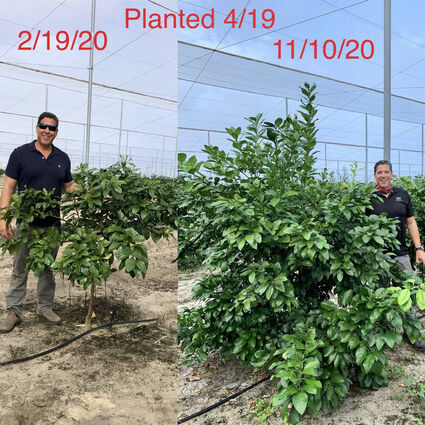 Ed Pines shows the rapid growth he has achieved for young citrus trees inside his 400-acre screen-protected grove. He says the process of growing under cover requires less water, pesticide and fertilizer, but results in quicker production of fruit.

Fried said in a statement that Tuesday's forecast "is a testament to the resilience of Florida's citrus growers, our state's dedication to our proud citrus industry, and our department's commitment to innovation in the face of ongoing challenges."

She added that "citrus is Florida's signature crop, full of heart-healthy and immune-boosting vitamins and nutrients that consumers demand as we continue the fight against COVID-19. We remain committed to supporting our citrus producers with research, technology, and techniques to fight the spread of citrus greening."

For the 2022-23 state budget, which will be put together by lawmakers during the 2022 legislative session, Fried has requested $15.6 million to support Florida citrus production, health, and research, among other initiatives.

EDITOR'S NOTE: Both the LakeWalesNews.Net and The Florida Phoenix have followed the challenges that face the citrus industry, and will work to keep you informed of this ongoing story.