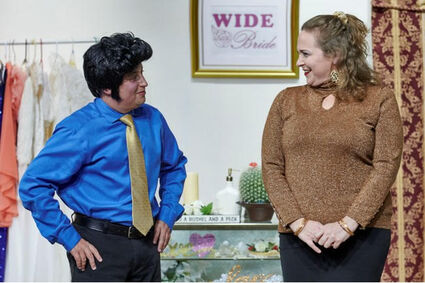 A zany comedic presentation fills the stage at Lake Wales Little Theatre through November 21 as they present "The Last Roundup of the Guacamole Queens."

The farcical production is filled with laugh-generating situations and some one-off show-stopping laugh lines. Pratfalls and a measure of slapstick are thrown in for good measure.

The play is the third in a series highlighting the crazed trio of Verdeen cousins who inhabit the fictional town of Sweetgum, Texas, and calls up every cliché imaginable in that setting, from a fracking earthquake to a sausage sale at the local pork butchery. Regular theatre-goes may recall the "Red Velvet Cake Wars" of a few seasons ago.

Cousins Gaynelle, Peaches, and Jimmie Wyvette Verdeen, played by Micky Caban, Holly Murren, and Dorinda Morrison Garrard, are the owners of "Wide Bride," a bridal salon catering to "Texas-sized brides." The trio performed admirably given the challenges presented by the script, which provides a wild ride from serious moments discussing the potential failure of their business due to the growing lack of appropriately-sized single women, to the demands of hiding the body of an elderly alumnus who somehow appears in their establishment after dying on a Greyhound bus. Garrard was especially credible as a Texan entrepreneur and feisty gad-about.

The cousin's nemesis is Lamerle Verdeen Minshew, played by Rhoda Beutler. Lamerle is a self-righteous wanna-be church deacon and mayor of Sweetgum who attempts to uphold the family name against the free-wheeling reputation of the cousins. Beutler carries off the role well, even as her hopes are repeatedly dashed as events unfold.

The three cousins are also challenged by the antics of Tom McCance as their Uncle Aubrey Verdeen, one of the last two survivors of the original graduating class of the abandoned Sweetgum High School. He is a late-life Romeo who shuffles hilariously across the stage in pursuit of single women, played by Sandy Odom and Laura Lease as Della Crowder and her sister Ennis Crowder Puckett. Uncle Aubrey eventually finds the trouble he seeks.

Sandra Wolf pulls off the neat trick of playing dual roles as Dixie Davenport and Tanzie Lockhart. Dixie is the host of a local television talk show broadcasting to "dozens of homes in the tri-county area." Tanzie is the social-climbing local graduate who has become personal secretary to Texas' bumpkin governor.

Brent Ours, cast as Sheriff Grover Lout, spends much of the play pursuing Jimmie for her poor driving and worse. Rounding out the cast are Ian Elliott as village idiot Dewey Davenport, Brad Breaux as the schizophrenic local graduate Raynerd Chisum, and Natalie Murren as CeeCee Windham. 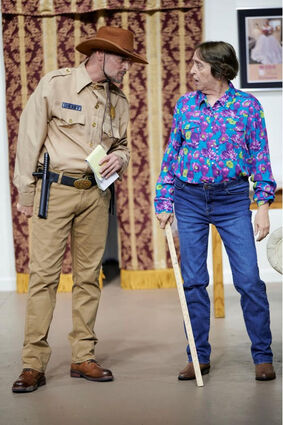 Sheriff Grover Lout (Brent Ours) spends much of the play pursuing Jimmie Wyvette Verdeen (Dorinda Morrison Garrard) for her poor driving and worse. Jimmie, however, still wields a big stick.

The entire cast is swept up in a reunion frenzy before the imminent explosive destruction of the old school gives them one last chance for a be-all, end-all class reunion. The attendance of the governor seems like frosting on the cake until their plans begin to collapse.

The Play is offered on Friday and Saturday evenings at 7:30 and Sunday matinees at 2:00 pm. Tickets are $20 for adults and $14 for those 18 and under. They can be purchased online at http://www.lwlt.org, by calling 863-676-1266, or visiting the theatre box office at 411 North Third Street. in Lake Wales. That location is one block east of Scenic Highway near Bok Academy North. The box office is only open between 10 a.m. and 2 p.m. on Wednesdays. The intimate theatre contains about 140 seats in raked rows, so visibility is good throughout the house.