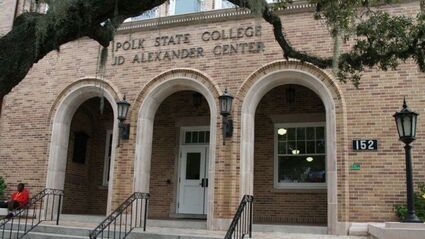 Polk State's Lake Wales campus, located entirely in the two-story JD Alexander Center on Central Avenue, has doubled its student population. Enrollment has grown from 600 to 1,200 students in the past five years, despite being limited to five classrooms.

Campus Director Dr. Andy Oguntola described the innovation that was key to the growth, and how the relatively small building houses multiple classes. Under a concept he introduced, students attend classes one day a week in person, then follow it with a virtual class to allow another group to share the classroom. By alternating uses of the space and adding the virtual classes, the use of the building was doubled.

"I wanted to be sure to offer higher education to as many students as possible," Oguntola said when asked about the innovation. "We needed to do a better job of reaching out to our constituents and understanding their needs," he said. His desire to serve the community also led him to expand the local curriculum to allow students to achieve their degrees without having to travel to other campuses of the college.

"We added a course in Oceanography, which meets the Natural Sciences requirement," he said, "so a student can achieve the entire 60 hours needed to obtain their bachelor's degree in Lake Wales."

Oguntola, a Lake Wales resident, is also cognizant of the impact of the college on the economic development of the downtown area around the campus. A nearby location has been targeted for the possible construction of a $4 million business incubator.

"Just think of the economic impact potential of 1,200 students," he said, describing how the right services nearby could benefit from their presence. Unless space can be found for additional classrooms the college will be unable to expand to serve the growing demand. The campus is adjacent to the Lake Wales Police Department, which has also outgrown its facility..