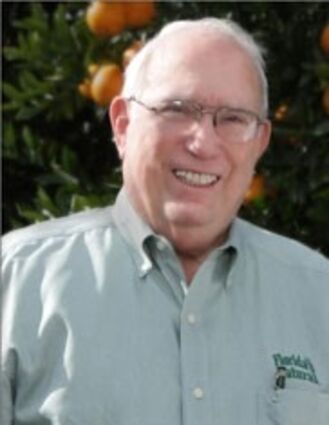 One of the most significant figures in the long history of Florida's citrus industry, Frank M. Hunt II, passed away Saturday, November 27 at his residence in Lake Wales. He was 93,

Born in Lake Wales to a pioneering family in 1928, Hunt progressed through Lake Wales schools before leaving to attend Erskine College in Due West, South Carolina. In 1950 he graduated from the University of Florida in Gainesville with a BS Degree in Business Administration, which he immediately applied to in his work for the family business.

For thirty years president of Citrus World, Inc, Hunt oversaw the transition of the major cooperative into Florida's Natural, growing it into the third-largest seller of fresh orange juice in the nation. He simultaneously led numerous other business operations, including his own family's Hunt Brothers, Inc. from 1984 until 1997. He had served on the board of that corporation since 1950.

Hunt was widely admired for his business acumen and sought to serve as a director to numerous enterprises, many involved directly in the citrus business, including Seald-Sweet, Highland Crate Cooperative, and HESCO. He also served as president or director of several financial institutions including the American Bank of Lake Wales, where he served eight years as chairman of the board, and the National Bank for Cooperatives (CoBank) in Denver, Colorado.

He served the same role for the Black Hills Passion Play, where he was instrumental in bring the attraction to Lake Wales, providing the site upon which the amphitheater was constructed.. He also worked to create the Lake Wales Family YMCA, now a city-owned recreation facility.

Hunt was named Citizen of the Year for Lake Wales in 1970, and received the Algernon Sidney Sullivan Award from Erskine College in 1982, and an Honorary Doctor of Humanities from the college in 1991. He was honored by the Historic Lake Wales Society in 2001, and was named Lake Wales Pioneer of the Year in 2005,