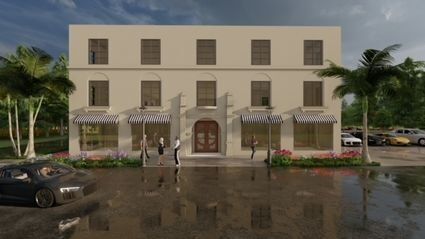 The Seminole Hotel could become an anchor for a reconstructed North First Street corridor under the Lake Wales Connected Plan. This is an architect rendering of a restored Seminole Hotel.

The vote came despite a surprise last-minute appeal from prior owner Harout "Henry" Kebabjian for an additional $17,000 he will now be forced to pay in order to provide a clear title to the property.

Kebabjian, represented by an attorney, had agreed during binding arbitration to the sales figure, which he expected would recoup his original expense of purchase and attorney fees. His appeal at the start of Tuesday's meeting came as an apparent surprise to City Attorney Chuck Galloway.

Galloway was asked by Commissioner Daniel Williams if he could explain Kebabjian's request.

"I was unaware of that, because that was not discussed at mediation," Galloway replied, "but that was the responsibility of Mr. Kebabjian's counsel, not the City. It turns out that there are taxes owed for '20 and '21," Galloway added, indicating that the other charge cited by Kebabjian "likely related to expenses incurred by the City that are now on the tax bill."

The $50,000 agreed price relieved Kebabjian of responsibility for hundreds of thousands in liens for code violations that had been levied on the building, most from before he purchased it for a reported $10,500 from the Cardiff Howell Revocable Trust, which had purchased it for $560,000 in 2005.

The City had hired a contractor to test the building for the presence of asbestos prior to seeking bids for demolition in 2019. It is that expense which has now become part of the tax bill on the property. Since Kebabjian agreed to the deal but neglected to include the additional liens on the building, he will now have to absorb that cost. The sales price was reached during binding arbitration in November,

Galloway said that Kebabjian's attorney had contacted him after arbitration suggesting that the city split the unexpected costs. "The City requested and agreed to pay for title insurance," Galloway told commissioners. "The City doesn't have responsibility for curative measures" on the title.

After discussion the City Commission unanimously agreed to the purchase. It is expected that the property will eventually be conveyed to the Community Redevelopment Agency, which can negotiate directly with anyone proposing a rehabilitation of the three story building, which is expected to be returned to residential use.

Seems to me that it would havw been easier to work with the current owner than buy the building and start from scratch. With all those fines hanging over his head, we had some leverage. There was no way to ever collect the fines so offer to reduce the funes as certain milestpnes were met. He has to pay for the work bwt we still hold the hammer. Now we'll have to give somebody incentives to take it off our hands. Follow the money on this one.

It doesn't seem to make sense to pay somebody for a building that is old and worn out and not make them pay the back liens and taxes that they owe. where does that make sense?