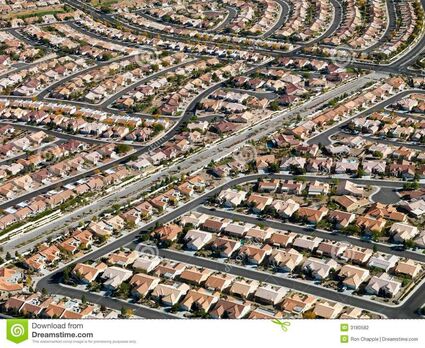 Urban sprawl takes many forms, including large areas of housing without greenbelt or parks. and poor roadway networks

The challenge of managing the wave of new development proposed for Lake Wales was the topic of a two-hour workshop for city commissioners Friday afternoon, with the prospect for much more time to be spent on the topic in coming weeks and months. The nearly ten thousand housing units projected to fill a dozen developments in coming years are likely to attract an associated wave of new commercial development.

Hearing presentations from city planners, experts, and citizens, the commission wrestled with how the city could guide the process and maintain and improve our quality of life.

The threat of "urban sprawl" consumed much of the early discussion as Development Services Director Mark Bennett explained that it's difficult to define but "you'll know it when you see it." He cited areas with dense development on arterial roads, featuring large signs and individual driveways, as sprawl.

He cited examples of undesirable growth that have occurred in the area in past years, including a mixed commercial strip on US 27 south of the city that includes manufacturing, a mobile home park, and other activities, each with a driveway on an arterial roadway.

Bennett also mentioned the Lake Pierce Ranchettes northeast of town as a poorly planned residential area without public utilities, accessible parks, or other services. Bennett described lots of an acre or more as "to much to mow, and too small to plow."

City planner Autumn Cochella described the numerous steps each new development proposal must go through, from annexation to future land use changes, zoning, reviews by city agencies including police and fire departments, utilities and more. Then there are engineering design reviews before a plat can be approved, which then requires approval by the commission.

Bennett described cities as "pockets of intentional density," and explained the benefits of concentrating growth within them. "Cities are able to provide an urban level of service for police, fire, streetlights, water, sewer..."

Local attorney Jack Brandon also addressed the commission, citing his years representing developers in land-use applications. "When I came here in 1970 there was no zoning," Brandon said, explaining how the state had instituted the Comprehensive Growth Management Act in the 1980's, which requires local governments to consider whether services would be in place "concurrent" with the demand generated by growth.

The questions commissioners should consider, Brandon said, were "what is our capability? Where should we look at expanding? What should we require of developers?"

"You'll be surprised at how forthcoming developers will be if we give them a clear idea of what we expect," Brandon added.

Deputy Mayor Robin Gibson also encouraged city staff to work to attract "good developers" while blocking "bad developers." "There are good developers out there," he said, "and if we maintain our standards, we can attract them."

City Manager James Slaton, in summarizing the meeting, reminded commissioners that new development pays large sums that can be used to upgrade services for existing residents as well as new-comers. "We think of a development like Leoma's Landing," which is being developed north of Chalet Suzanne Road, Slayton said. "Those 335 homes will bring in about $3 million in impact fees. We have a current deficit of $300,000 in our public facilities budget," he added, citing the need for roof replacements at the administration building and Austin Center, as well as numerous streets which need resurfacing. "We've done a good job lowering our millage rate," he said, and anticipates future cuts.

The city presently collects impact fees on new development for the cost of providing police, fire, water, sewer, parks, and library services. A "mobility fee" ordinance is being developed which will help fund such needs as street resurfacing, bike and walking paths, public transit, and more. A mention of school impact fees brought a comment that "we aren't collecting them, now," from Gibson. Currently all school fees go to the Polk County School System. Most local schools are operated by the Lake Wales Charter School System.

Local citrus grower Ellis Hunt Jr. spoke of the present demand for land, saying that in the 'bubble' market of 2005-2007 his firm received scores of calls from speculators hoping to buy and 'flip" land. "This time," he said, "we've only gotten a few calls, but they are serious about projects."

"I wish I could say that citrus was doing so well that we weren't interested in selling. Unfortunately, that's not the case," Hunt said. "Like it or not, they're coming."

As the meeting ended Slaton promised commissioners that they would have another workshop on the topic in coming weeks to continue the conversation.