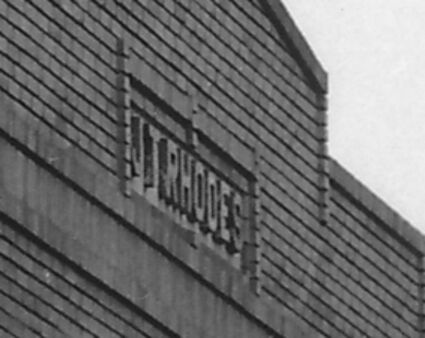 A mystery that may require a good memory to solve has emerged from the ongoing restoration work being performed on a downtown building.

The two-story masonry structure located at 244 East Park Avenue was one of the earliest brick buildings constructed in Lake Wales, following close upon the heels of the ornate Lake Wales State Bank Building at the corner of Scenic Highway and Park Avenue.

Both buildings were constructed by JT Rhodes, one of the city's early builders. Rhodes, known as "Jimmy" to his friends, placed the finishing touch on his building by placing his name on the parapet located at the top of the building. It is that sign, or perhaps the individual letters spelling his name, that have gone missing...sometime in the 1960's or early '70's.

The building is being restored as a personal project of local attorney Robin Gibson, who grew frustrated with the square blank stucco face that had been placed on the building decades ago. He is attempting to return it to its original design, with broad windows and a curved parapet above. Recent work removing that stucco wall uncovered the sign frame, but no letters.

The letters, clearly visible in old photographs, appear to be made of some form of unglazed masonry. Based upon the setting it is estimated that they would be no more than a foot in height.

"It seems the frame was designed to simply slide the letters in," said Gibson in describing the mystery. At some point, likely during the 'remodeling" forth or more years ago, the letters were removed. Gibson wants to see them put back in their place of honor.

"They are probably sitting in a garage somewhere," Gibson said, pointing out that the Rhodes family was still living in the area around that time, and that they may have salvaged the letters before they were covered up.. Mr. Rhodes' son served for many years as postmaster in Lake Wales.

"Perhaps some family member has them, or knows where they are, or someone still maintains contact with the Rhodes family" Gibson mused. "It's a good mystery." It's a puzzle that may take the entire city to solve. 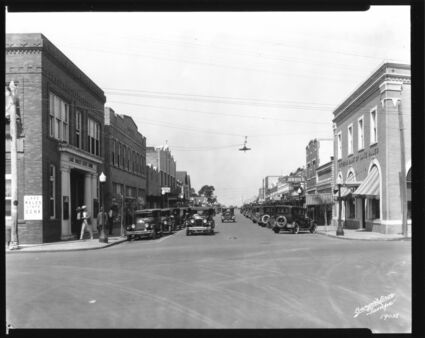 A view of East Park Avenue shortly after the city was founded. The Rhodes Building is the second on the left.

JT Rhodes went on to construct several other buildings that are now listed on the National Register citation for the Lake Wales Historic District, including both Arcades, and the Scenic Theatre.

Gibson, who serves as the chair of the Lake Wales Community Redevelopment Agency, has long been a booster of downtown, and has previously rehabilitated four other buildings there. This one is purely a labor of love, as he has no intention of using it himself. "That wall just bugged me," he said in describing the project. The blank wall was cited as a deterrent to the reinvigoration of the historic district, which will soon undergo major streetscape work.

How does one contact the Lake Wales Redevelopment Authority ?

I love an historical mystery. Please keep us posted on what develops.