Cutting Christmas Trees: Good or Bad for the Environment?

The Answers May Surprise You 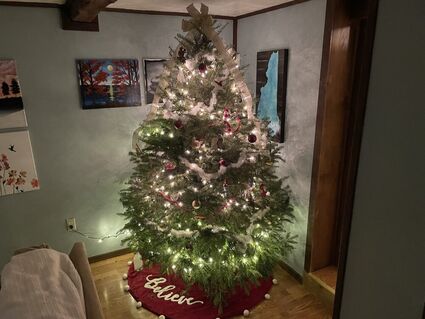 Christmas is a time for celebrating the season and a time for cutting down trees – and that holiday tradition sometimes leads to discussions about what's best for the environment: Is it greener to buy a real tree or a fake tree, or abstain altogether?

UNH forest resources specialist Steven Roberge explained some of the factors he weighs in determining whether cutting a tree is an environmental boon or bust.

The first caveat, according to Roberge: It's not as simple as you might think. A lot of people assume the practice is environmentally harmful, but that's not necessarily true.

"When trees are cut in an appropriate and thoughtful manner, I have no problem with cutting trees and managing our forest," he said.

Christmas trees are a little different because they are a crop that grows in a plantation setting. Roberge compared it with a tomato – but one that's grown for eight to 12 years.

Christmas tree farms provide habitat that can provide ecosystem services – or benefits to the natural world. "It's still open space, the soils still suck in carbon and keep carbon. They filter our water. They provide places for critters to bounce around," Roberge said. And that's a cycle that continues, since the trees that are cut are replaced by new seedlings growing in their place.

Supporting a local farm is a way of keeping that land open and free from development. New Hampshire is losing forest and farm land at a rate of round 5,000 acres per year, Roberge said, and those acres are mostly being lost to development.

Trees are also part of both sequestering and storing carbon, which are separate but related functions. Carbon storage is how much carbon the forest retains – stored in both trees that are living and dead, as well as in leaves and soil. The older a forest, the more carbon it retains.

Carbon sequestration is the carbon that trees are actively pulling out of the atmosphere to use for photosynthesis – and this usually peaks in young to intermediate forests, or trees that are between 30 and 70 years old. Trees do continue to sequester carbon throughout their whole lives, just at a lower rate. (Editors note: sequestration is determined by the amount of growth of a tree. Once a tree reaches full maturity, the rate is reduced. Many long-lived species continue to grow larger for hundreds of years, or in the case of sequoias, even thousands of years.)

Both carbon sequestration and carbon storage are greatly diminished when forests are turned into developments.

"If you develop an acre of land, not only do you lose the ability to sequester carbon in the future, you also lose the storage of that carbon that's on the site," Roberge said. And that is a climate concern.

As weather events get weirder, it is the forests, the farm fields, and the Christmas tree plantations where the ground is able to absorb four or six inches of rain – rainfall that pavement cannot absorb. The less pavement, the better we are able to weather those really catastrophic storms that cause a lot of erosion and flooding, Roberge said.

Finally, where a Christmas tree ultimately ends up is an important part of its environmental journey.

For a tree that's harvested and turned into a piece of furniture, the carbon is going to be locked up in that chair for a long time – preventing it from getting released into the atmosphere. On the other end of the spectrum is wood that's cut and burned for fuel, immediately releasing carbon back into the atmosphere. Particulates from wood-burning stoves can also be harmful to human health. Wood creates less smoke when it is burned efficiently, and is therefore less harmful.

For many Christmas trees in New Hampshire, the final stop is often a local transfer station. "A lot of towns and counties will take material like that, put it through a drum grinder, or they may turn it into mulch or compost. And in that case, that's just material that's going back into the ground and the decomposition of it is pretty slow," Roberge said.

Some have found outside-the-box ways to recycle their trees – like offloading them to farmers with goats who are eager to munch on the Christmas trees, a treat like "candy" to them. In some cases, the trees can feed the goats for months.

"To me, the most important thing is keeping that forest land or that land as open space instead of being developed," Roberge said. Preventing lots of land from getting developed, he said, will go a long way in our fight against climate change.