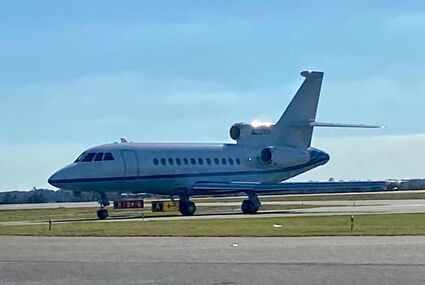 This Falcon 900 corporate jet which arrived Monday at Lake wales Airport represents the increased capability of the airport in relation to economic development since a runway extension and new taxiways have made the facility more attractive.

With growth in Lake Wales expected to accelerate in coming years, Lake Wales Airport is staying ahead of the curve, and plans are being laid for further improvements, according to Airport Manager Amanda Kirby.

Working from her on-site office, which doubles as a conference room for contractors working on the several construction projects recently completed or ongoing, Kirby has overseen the greatest surge in improvements ever noted at the local airfield. Kirby has served as manager of the city-owned airport for three years.

Close on the heels of a project that added 1400 feet to the 'Alpha' runway designated 6-24 for its compass headings, the airport has seen the addition of full taxi-ways on that runway as well as "Bravo," 17-35. Ongoing is the reconstruction of the apron which serves the fueling station while also providing tie-down accommodations for parked aircraft. All these projects were funded largely by the Federal Aviation Administration (FAA).

Other projects currently underway include the construction of a hangar adjacent to the 17-35 taxiway. That 16,320 square-foot building will include four bays, one of which will be occupied by the private jet of the building owner. The others will be available for lease.

Jets are a significant part of the future of the airport now that runway extension has made it possible to serve larger aircraft. Kirby expects the corporate jet activity to increase.

Meanwhile a second large hangar and maintenance facility is also under construction by Jump Florida, which operates a skydive facility at the airport. That 7,000 square-foot building will permit the first public aircraft mechanical maintenance operation locally.

"They purchase and sell so many aircraft," Kirby said of Jump Florida, owned by Pasquale Rodriguez. The new facility, she said, will allow them to repair purchased aircraft before selling them.

Other commercial activity at the airport includes a flight school, currently leasing space in the main office building, which also houses the pilots' lounge. Other space in that building will soon be remodeled to provide a reception area, courtesy of the FAA.

Currently under development is a new Airport Master Plan document which will be used to apply for future FAA grants, including a new entrance road. The rapid growth of operations at the adjacent Grow Healthy facility has precluded using Acuff Road, once planned to provide the entrance corridor.

It is expected that an extension of West Central Avenue will be included in that plan, which will provide the most direct access for users coming from either US 27 or SR 60, as well as emergency services, eliminating a railroad crossing.

The airport has no control tower but instead uses a "virtual tower" program that tracks operations in real time using aircraft transponders. Kirby says that the service, which is currently showing about 1,000 monthly operations, will help qualify the airport for future FAA grants.

Other improvements in place at the airport include automated weather reporting, known as AWOS, precision approach lights (PAPI), and low intensity runway and taxiway lighting that approaching pilots can turn on from miles away.

Hope is that FAA funding will be granted to complete the security fencing, which now borders about half the field. The intrusion of animals, including coyotes and cattle from adjacent pastures, is cause for some concern, according to Kirby, who admits to spending several hours one day helping herd invading cows back through a fence using cars.

A variety of general aviation aircraft use Lake Wales Airport. Lack of hangar space has been one of the limiting factors in growth of the facility.

Is there the potential for future commercial use of the airport, such as connector airlines? "Not in my lifetime," Kirby says, despite the ideal location. "Not unless the FAA gets serious. They move very slowly," she said, but added that an infusion of money for needed infrastructure projects has been included in recent Federal legislation.

As there is a statewide shortage of hangar space, the numbers of aircraft based at the airport have been increasing as new hangars have been constructed. "I was delighted to be able to lease a city-owned hangar at Lake Wales," said Lake Wales pilot Rudy Engholm, who formerly kept his Cirrus at Bartow.

"If we want to increase the number of well-paid jobs in the area, the airport is an important piece of that puzzle," Engholm added. "Now if we could just get a good airport restaurant..."

Thank you. There are lots of interesting things happening around Lake Wales, many changes!

Good article. The kind of local news we need to have access to.