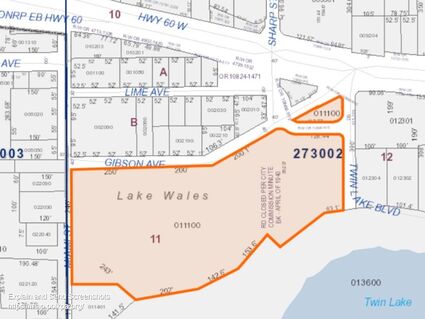 This parcel and adjacent lands are marked High Density Residential (HDR) on Future Land Use maps for the City of Lake Wales, allowing up to 25 residential units per acre.

A large tract of vacant land fronting upon Twin Lakes is now primed for development, thanks to a street redesign as part of the SR 60 bridge project.

Lake Wales City Commissioners are expected to take final action this Tuesday to close the right-of-way of a portion of Gibson Avenue that has long divided two small parcels belonging to Hunt Brothers' citrus operations.

The former course of the avenue slashed through the two parcels as a 45-degree angle. That street has already been replaced by the Florida Department of Transportation as part of the highway project.

Reconnecting the two tracts is likely to make them more attractive as an entrance parcel for housing development on a much larger site adjacent.

The site has long been expected to become a future apartment location. All three parcels, and all existing homes on adjacent lands along Highway 60, are marked High-Density Residential (MDR) on the city's Future Land Use Maps (FLUM), allowing up to 12 dwelling units per acre.

The MDR classification "is intended to encourage redevelopment of declining urbanized areas along major roadways and to allow for new multi-family development convenient to commercial centers," according to the city's Comprehensive Plan.

"There's nothing on the horizon," according to Ellis Hunt Jr. of Hunt Brothers, Inc., but he indicated that the long-vacant land could be made available. 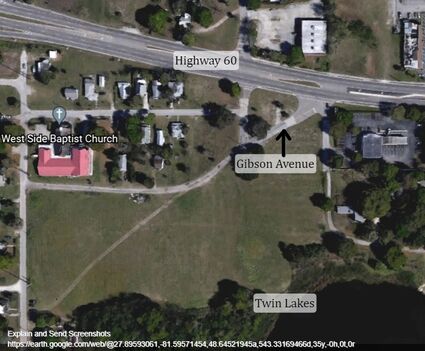 This aerial view shows the adjacent Twin Lakes and SR 60. The ongoing highway construction and widening will also see the construction of a noise barrier along that adjacent portion of the highway.

A serious shortage of housing across Florida has driven prices significantly higher in the last 12 months, generating more interest from developers in such parcels. The luxury 335-unit Serenity Apartments near Eagle Ridge Mall brought prices unprecedented in the area but were fully rented in a few months.

"Densification" within the city limits was cited during a recent City Commission workshop as a way to reduce the threat of "urban sprawl" consuming large swaths of land around the margins of Lake Wales. It is also expected to help create a stronger market base for more downtown restaurants and shopping, in keeping with plans by the Community Redevelopment Agency to reinvigorate the historic center of the city.