Span Will Eventually Bear Westbound Traffic Over US 27 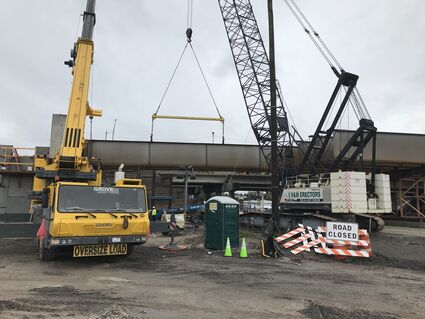 30-ton steel I-beams were lifted into place to support a new bridge over US 27 during a weekend closure. Each beam consists of three such segments, a total of 15 beams for five bearing spans.

Construction of the first of two new bridges designed to carry traffic on SR 60 over US 27 took a major step forward over the weekend despite a spate of inclement weather.

Crews managed to lift fifteen steel I-beams weighing nearly 30 tons each, placing and securing them to massive concrete bases during a 54-hour window created by the temporary closing of US 27. Numerous police officers were on duty at traffic chokepoints.

Heavy rains early Sunday, about 40 hours into the project, caused a delay of about two hours. Strong and gusting winds were also a concern following the passage of a cold front. Each 59,000-pound beam segment had to be lifted by a crane, while a second crane then steadied them as they were fastened and secured.

Unavoidable traffic snarls during the closure made travel difficult for many drivers seeking routes through Lake Wales, as more than a dozen different detours were created to divert traffic to and from the various directions. 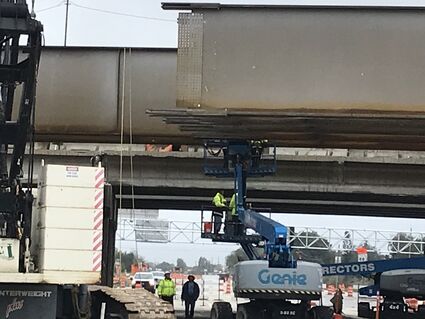 Once lifted into place, the three beams were joined to create a single 90-ton spanning beam. The entire operation required the closing of busy US 27 for 54 hours.

Some problems were caused by heavy trucks that missed special truck detours, ending up on city streets that were difficult for them to navigate. Semis attempting to turn onto Scenic Highway from Winston Avenue were confronted by heavy traffic, which prevented them from making the wide swing needed on the tight corner. resulting in long delays..

Other problems were created by hundreds of drivers who ignored the detour directions and chose to make U-turns on busy SR 60 to get to northbound US 27. No information was available regarding the number of vehicle crashes that occurred during the weekend.

The bridge project will continue with a completion date of 2025 before finishing touches are in place. Before that time construction is expected to begin on the widening of US 27 south of Lake Wales from four to six lanes from SR 60 to the Highlands County line.