An initiative by Congressman Darren Soto may bring help for a problematic sewer system that may be polluting surface waters. Rep. Soto was involved in the passage of the INVERT Infrastructure and Jobs Act, which he called the "biggest infrastructure investment in America since Eisenhower."

Soto described his previous work with the Lakeshore community, particularly in the aftermath of Hurricane Irma a few years ago. "We were really worried about how long it might take to get power restored to you."

"We've seen a difference in the last few years," said Lakeshore Club Villas president Wayne Estes, describing the problem with crumbling clay sewer lines. "A few years ago you could see the fish" in the lagoon at the 500 unit complex. "Now the water is green."

Estes told Soto in the meeting that a retired engineer resident told him that the shaking emanating from the nearby Avon Park Gunnery Range was likely a cause for some of the cracking pipes. The range is also used by the US Air Force for bombing practice.

Estes said that a contractor had been hired to thread television cameras through the pipes to inspect them, but that they were unable to get through some collapsing areas. Repairs to the system could cost up to a million dollars, he was told. Lakeshore, in unincorporated Polk County, was built some 60 years ago and has its own small water and sewer systems, portions of which now serve some neighboring developments. Nearby Nalcrest has a similar arrangement.

Responding that the solution could come from one of two sources, Soto promised to raise the issue with the Department of Defense while also seeking infrastructure funds. "We have the world's strongest military and we support them, but sometimes impacts are unavoidable," Soto said, indicating that incidental damage could and should be corrected.

"We've stopped spraying weeds because they just sink to the bottom and rot," Estes told Soto. 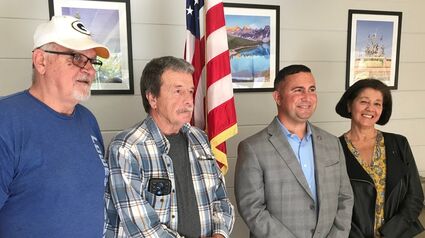 Members of the Lakeshore board pose with Congressman Darren Soto after their meeting. L to R are Jerry Treder, Wayne Estes, Soto, and Evelyn Rivera-Miranda

Soto noted that a similar change has been made by other water managers who have seen the same problems. "Now they just remove them mechanically," Soto said.

Soto saluted the board members, including vice-president Jerry Treder and director Evelyn Rivera-Miranda, for their work in keeping the community functioning. Lakeshore is "like a little town, but with less resources," he said, because they gain revenue only from assessments upon residents. "You don't get any state money," he noted.

Lakeshore Club Villas is about 72 percent Hispanic, noted Rivera-Miranda, but "we have a great community, We have people from the islands and snowbirds, and everyone really gets along great."