Commissioners Approve Legal Action If No Agreement Reached By January 28 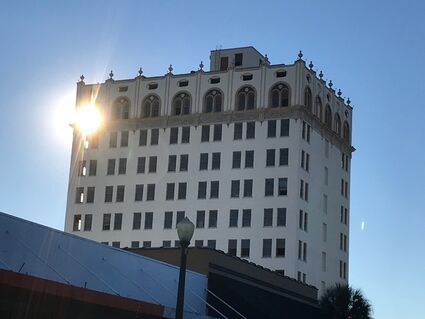 The afternoon sun shines through an empty room on the tenth floor of the vacant structure dominating downtown Lake Wales as negotiations over its fate continue.

A long-awaited proposal to redevelop the prominent former Walesbilt Hotel into a luxury full-service hotel and conference center is still viable, according to representatives of the development team, who pledged to keep working toward an agreement with the city that will assure the success of the project.

Citing "progress" but large remaining differences between the parties, the Lake Wales City Commission Tuesday night authorized legal action against Dixie Walesbilt, LLC while leaving the door open to further negotiations, with a deadline of noon on January 28. If no deal is signed and ratified by the Commission by that hour, the city's legal counsel will proceed to file the suit.

The lawsuit would "toll" the Statute of Repose, a necessity to avoid losing all recourse on the city's grant of title under the original agreement, which expires February 2. While that wouldn't signal the death of the deal, "It would cloud title" which could "pull financing off the table," the developer's financial representative, Daniel Greenberg, told commissioners.

Hotel owner Ray Brown, who received the title to the property on February 2, 2012, has arranged an "at the bell" financing package based upon a major "flag," or hotel brand, for the eleven-story building. He had been unable to bring forward a viable financing plan during prior years, which featured both the "Great Recession" and a brief economic boom.

While the February 2 date evokes images of the popular "Groundhog Day" film, commissioners are hoping that this time the seemingly-endless loop of delays will finally be broken.

In need of a multi-deck parking garage, developers asked that the city provide one, assisting in the purchase of the present Care Center Thrift Store property to accommodate it. That building would be turned into a conference center if the project moves forward as designed. The city's written response was a flat "no."

"That parking garage wasn't just for us," Greenberg said in response to criticism from Commissioner Robin Gibson. "It's in the city's development plan."

Dedicated parking is a clear requirement for the project to attract a flag such as Hilton or Marriott. A project representative indicated that the minimum acceptable number would be "about eighty spaces." A document provided to LakeWalesNews.Net by lenders states that a "flag" is a requirement for the financing. 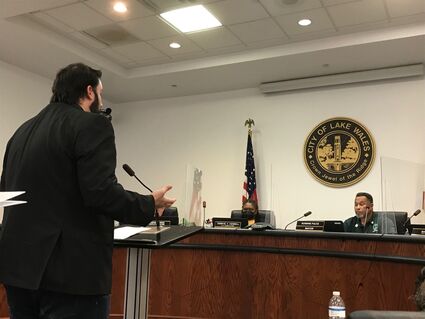 Daniel Greenberg of Blue Chip Capital discussed with city commissioners the state of the complex negotiations he is conducting with city staff and attorneys over the financial incentives that may be needed to keep the redevelopment project alive. He is also negotiating with lenders who have pledged to finance the deal if specific thresholds are met. They include dedicated parking for "about eighty" vehicles.

"If that word is inappropriate, then I apologize for using it," Fultz said.

Greenberg, representing Blue Chip Capital, responded that they were asked to provide a list of what they'd like to see in an agreement, indicating that it was somewhat of a wish-list. "I don't think we're as far apart as Commission Gibson has indicated," he said. Any incentives or inducements the city or Community Redevelopment Agency might provide could make the deal more financially attractive to lenders and assure its completion.

Financing of $9 million has been arranged for the hotel renovation, but the cost of the entire project could run "up to $20 million," Greenberg told Commissioners. He added that the financial impact to downtown Lake Wales would be "$100 million over four to five years. A million dollars (from the city) may sound like a lot" but put in that context, "it's really not that much."

Symbols of Success and Failure

Long recognized as the dominant symbol of downtown Lake Wales, the eleven-story Walesbilt Hotel is now among the dominant topics of conversation in the city.

Opened with great fanfare in 1926, the hotel has seen good times and bad. It fell victim to the Great Depression in its infancy, hit its hey-day during World War II, and was last renovated in 1972. Vacant since 1995, it's been abused, stripped of its prestigious furnishings and trim, and sometimes wished into oblivion. Yet it has endured as a symbol, for good or ill.

Solidly-built and touted as fireproof, the building has finally drawn the attention of serious developers who can see potential where many city residents may not. Boutique hotels in historic buildings have become very popular with upscale travelers. Major chains are placing their flags on buildings like the Walesbilt. The decades of success exhibited by Lakeland's Terrace Hotel, now a Hilton Tapestry Collection property, is an example of the impact they bring to host cities.

In what may be a once-in-a-generation opportunity, a powerful team of hotel managers and operators have proposed to make the Walesbilt their own and place a luxury flag on it. That would be a multi-million dollar investment, and an undeniable game-changer for the city, raising property values, filling the streets with visiting diners and shoppers, and attracting other investments.

Renovation of the hotel aligns perfectly with city plans to invest $18 million in downtown streetscapes and other infrastructure. Conversely, the glaring failure of a vacant hotel could undermine those efforts.

The City of Lake Wales has an interest in the property, having assigned the title to owner Ray Brown and witnessing years of frustrating inaction. With time running out on the "statute of repose" the commission is threatening a lawsuit to recover the title.

Yet does the city truly wish to become the owners of the property?

It's easy to play a game of what-if. Perhaps no other deal will appear on the horizon, and the city would own the property for years to come. In that case, success in a lawsuit would bear bitter fruit indeed.

For the developers, the success of the proposed hotel project requires reaching agreements not only with the host city, but with the financiers who will be on the hook.

The developers have submitted a wish-list of hoped-for contributions from the city and the Community Redevelopment Agency. Some are reasonable, while others are not. Among them is participation, at least, in the construction of a parking garage, which could readily serve downtown shoppers and diners as well as hotel guests. It's likely to be needed anyway if downtown revitalization succeeds. Compared to the planned million-dollar contribution from the CRA to the Housing Authority and $900,000 pledged to a downtown business incubator, it is not beyond reason to consider such an investment if it triggers a further multi-million dollar investment of private capital.

The years of economic upturns and downturns should remind us that opportunities can be fleeting. Recognizing the value of "a bird in the hand" should be enough motivation to keep this opportunity alive.

I do believe that our city commission would screw up a one car funeral. I bought a vacation condo here in 2007 and we are no closer to resolving the hotel issue than we were then.