Program Will Benefit the Junior League of Lake Wales 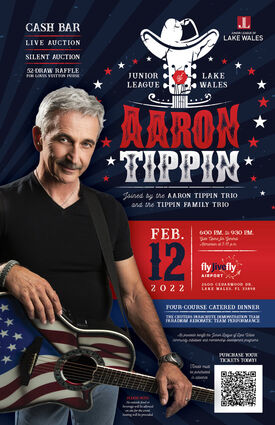 The Junior League of Lake Wales is kicking off their organizational efforts with a splash as they host country music star Aaron Tippin, who will headline a musical performance and aerial demonstration at a benefit performance on Saturday, February 12.

Tippin is a well-known country artist with a musical career spanning twenty-five years who will be performing with the Aaron Tippin Trio, as well as the Tippin Family Trio with his wife Thea and son Tom.

The event will take place at a private "flyJivefly" airstrip located adjacent to Lake Walk-in-the-Water. The evening of entertainment will include a performance by the Lake Wales Airport-based Paradigm Aerobatic Team and a display of multiple aircraft, including an AERO Vodochody L-39 Albatros Reno Air Racing jet, a T-28 Trojan from 1954, and a RV-8A known on the North American air show circuit as "Wild Blue," according to spokesperson Brandy Waters of the Junior League. The aircraft will be displayed on the flyJivefly airstrip, which belongs to Jerry Kerby and his wife, LM Sawyer.

"Kerby is a retired US Air Force Lt. Colonel, having flown both the F-15C Eagle and the F-4 Phantom" during his career, Waters said. "He is one of the founders of Draken International at Lakeland Linder International Airport with whom he still flies the F-1 Mirage, L-159 Honey Badger, and A-4 Skyhawk. Sawyer is starting her 27th year in the air show industry as an announcer and owns AirShow360 a live broadcast and social media company for which she is a host and reporter."

Tickets to the event are $125 each and include a four-course catered dinner with cash bar, and both a live and silent auction. Tickets are available from the Junior League online by clicking here. To reach the event site, it is suggested to take Walk-in-the-water Road south from SR 60, turn left at Sheppard Drive, then right on Cedarwood Drive. The gate will be on the right in two-tenths of a mile.