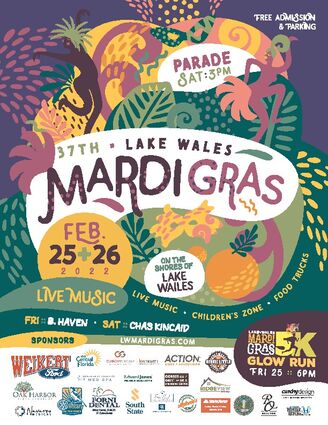 A zany parade featuring colorful floats, marchers and faux royalty will fill the streets of downtown Lake Wales with thousands of revelers this weekend as the traditional Lake Wales Mardi Gras observances reach their climax. The pre-Lenten festivities end at midnight on "fat Tuesday," or Mardi Gras.

Private parading clubs, known as "krewes" will vie for recognition as the best in parade as they liberally douse the crowds with thousands of strands of beads and other parade memorabilia. Some offer elaborate floats while others rely upon highly-entertaining marching "drill-team" cadres.

First time attendees are often surprised at the creativity of the street art on display in the hour-long parade, which will step off at 3:00 pm on Saturday.

Both before and after the main event, and beginning Friday night, music will be a highlight as ten different musical acts will perform on the main stage at Lake Wailes Park. Downtown restaurants will also get into the act, with Melanie's Seafood and Wales Pointe, neighboring businesses on Park Avenue, compete for crowd votes by offering sample-sized cups of traditional New Orleans-style jambalaya. Numerous other gatherings and celebrations are normally part of the event, which opened on Saturday with two Mardi Gras dance parties.

The main stage band line up will include: 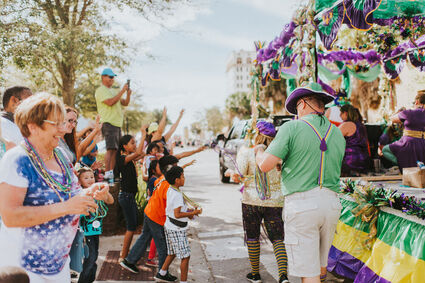 Crowds enjoy generous hauls of parade souvenirs from the multiple krewes during the parade.