By Suzie Schotelkotte and Robert Connors 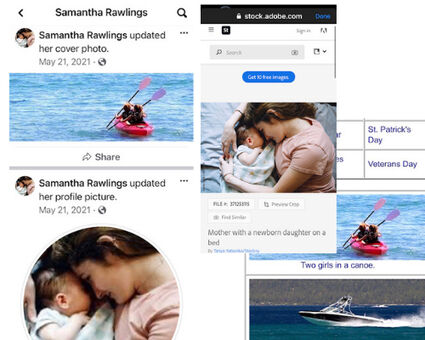 Publicly-available images were used to conceal the identity of someone who wrote numerous posts critical of rivals to superintendent candidate Andy Oguntola on a Facebook group reportedly for parents of Charter School students, but administered by the CCDF group. Administrators of the page included persons from outside the Lake Wales area.

A small but vocal group has been a significant influence on the process of selecting a new superintendent for the Lake Wales Charter School system, a simple reading of documents reveals. (See Related Story Here)

The Polk County chapter of the Ohio-based County Citizens Defending Freedom has been involved in the process at numerous points and has consistently acted to promote the selection of Andy Oguntola.

Two speakers who sought to end the national search in Lake Wales in September, Jimmy Nelson and City Commissioner Jack Hilligoss, now a mayoral candidate, serve on the board of directors of the local CCDF chapter. Nelson specifically called upon the board to stop the search and appoint Oguntola at that meeting.

The CCDF website offers a vision statement that says their goal is "to become the inspiration and action arm of local citizens to defend their faith, freedom, and liberty, while placing local governance under the watchful eye of local American citizens acting as patriots."

The CCDF recently presented a petition, which had not been signed by Polk County residents, asking for the removal of 16 books from school libraries for what the group deemed to be offensive content, saying they include references to rape and homosexuality. The Polk County Schools superintendent quickly complied with that demand, and the books have been removed from shelves for review.

Such reviews have been pushed by interest groups in the past, with little effect. A petition and subsequent review of books in Marion County resulted in all the books being returned to school shelves.

A Facebook group which has promoted the opinions of the CCDF has come under criticism for a lack of transparency and inaccurate description of its purpose. 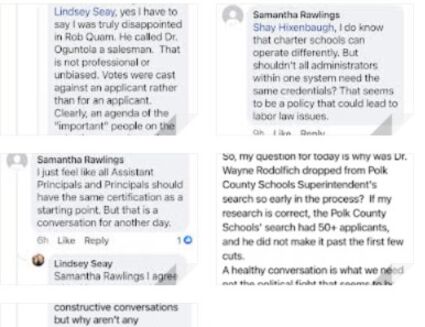 Examples of the near-daily posts attempting to influence opinion among unsuspecting members of the Facebook parents group. Dozens of posts critical of various search committee members and superintendent candidates were posted on the page.

Both Nelson and Seay were outspoken advocates at a September 8 trustees meeting calling for an end to the national search. Nelson specifically asked the trustees to appoint Oguntola at that meeting.

A local administrator of the group, charter school parent Lora Donley, previously called out what she described as a "catfish" profile, a fake persona created using publicly-available images, which was used repeatedly to attack the credentials of candidates, other than Oguntola, in an apparent effort to influence public opinion. Seay defended the profile as genuine, but it quickly vanished. Other administrators then removed Donley's admin powers.