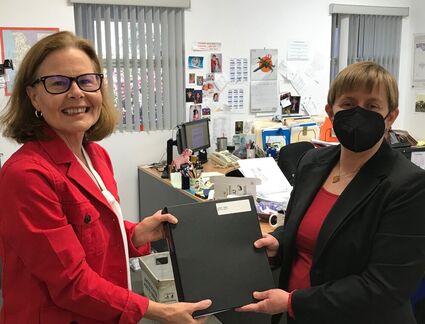 Mayoral candidate Tammy James (L) was first in line Monday to qualify for election, handing her documents and petitions to City Clerk Jennifer Nanek. She was closely followed by her two rivals, Curtis Gibson and Jack Hilligoss. The election will be held April 5 and all city residents registered to vote will be eligible to cast ballots in both the mayor and city commission district 4 elections.

Four of the six expected candidates wasted no time in filing their paperwork for City Elections after the qualifying period opened at noon Monday. They will each be a candidate for one of two open seats in Lake Wales government. Both the mayor and a city commission position will be on the April 5 ballot.

Tammy James, a candidate for mayor, was first to arrive at the office of City Clerk Jennifer Nanek. Her two opponents, Jack Hilligoss and Curtis Gibson, arrived during the course of the afternoon, completing the expected field for the mayor's seat being vacated by Eugene Fultz.

In the District Four City Commission race, three candidates have picked up the filing packages, but only one, Al Goldstein, had turned his in by the close of business on Monday. Two others, James Loydd and Daniel Kreuger, have yet to turn in complete filing packages.

The winners of the two races will take seats on the five-member City Commission in May, only four weeks after the election. City residents 18 or older who would like to vote still have time to register by visiting the online registration system at RegistertoVoteFlorida.gov or by calling Lori Edwards, Supervisor of Elections, for instructions at (863) 534-5888.