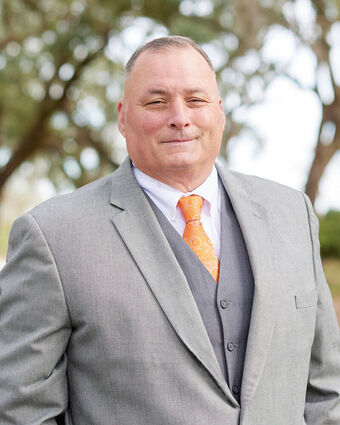 Dr. Wayne V. Rodolfich of Pascagoula, Mississippi was selected as the preferred candidate to lead the Lake Wales Charter Schools. Rodolfich was named the Superintendent of the Year in that state in 2020.

A nearly year-long search to recruit a new superintendent for Lake Wales Charter Schools concluded Tuesday evening, leaving many in the community determined to heal the divisions created during the process.

After an effort that at times seemed more like an election campaign than a search and involved seemingly unending political maneuvering, the Board of Trustees settled upon Dr. Wayne V. Rodolfich, who comes to the city from Pascagoula, Miss. As the vote was taken he was arriving in Lakeland, where he will spend the remainder of the week completing a year-long fellowship program with the National Career Academy Coalition.

The new superintendent of schools will be expected to run the seven-schools system while maintaining the standard of excellence achieved by former Superintendent Jesse Jackson, who built an award-winning program with the help of principals and staff members. The vote triggered a period during which the system will negotiate a contract with Rodolfich.

"I appreciate the support of the educators and community of Lake Wales," Rodolfich said. "The...community support the Lake Wales Charter Schools enjoys is unmatched and vital to its continued success. My wife and I are looking forward to introducing our children to this city and its schools."

Educators and school principals had been caught up in the search effort, with many leery of a process that at times appeared focused on pre-ordained results rather than the best-qualified candidate. A national search was initiated, halted, and restarted as various elements addressed the trustees and applied pressure for or against that search effort.

Prior to the final vote, about 18 citizens addressed the seven voting trustees before they opened their own discussions on the perceived strengths and weaknesses that each candidate might bring to the job. Several educators spoke on behalf of system teachers, saying that experience was key to the decision. Most gave credence to all four applicants, but most also backed Roldolfich - the only finalist who has been a superintendent.

Among the speakers was philanthropist Henry McCance, who has donated more than $5 million to the system since its inception. He called for reliance upon the teaching staff, citing the heavy support they had offered in a poll for candidates Rodolfich and Anuj Saran, the assistant principal of Lake Wales High School.

"I believe your front line workers, the teachers and staff, need a superintendent they can respect, trust, and learn from," McCance said. "This community needs to heal and come together" no matter who is chosen, he added, suggesting that they "consider creating important new roles" for applicants Andy Oguntola and Emilean Clemons in helping to "onboard" the new superintendent.

During board discussion their was some chiding of teachers who had failed to return the survey indicating preferences, resulting in about half voting. Trustee Chayla Outing, a non-voting teacher representative, responded that "some teachers are afraid of speaking out," drawing applause.

Trustee Rusty Ingley alluded to the heated debate within the community and the passions it had raised, saying "the LakeWalesNews.Net and The Ledger are not factual outlets for us to get our news from." Both publications provided in-depth coverage of the controversies.

In the final vote, it was educator Lori Hutto who offered the motion to hire Rodolfich, which quickly brought a second from new trustee Ingley. In the subsequent roll-call vote, they were joined by David Fisher and Marcus Kirby. Danny Gill, Tonya Stewart and Paul Gerrard voted no.