Most Mayoral and Commission Candidates Will Discuss Issues 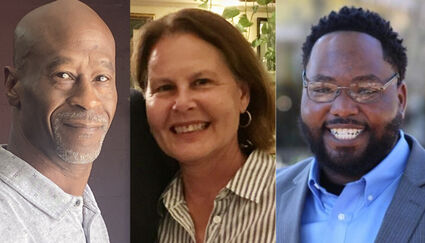 Lake Wales voters will have an opportunity to see and hear most of the candidates seeking to represent them in city government on Monday.

A forum sponsored by Rotary on the Ridge and LakeWalesNews.Net will be held at the law offices of Bill Ouelette, 151 East Central Avenue beginning at 7:00 pm. Three of the five remaining candidates will speak and answer questions during the event, which will also be streamed via Facebook. Brandon Alvarado will return as moderator of the annual event.

The original field of candidates was reduced after former city commissioner Al Goldstein withdrew his qualifying papers on the morning the process concluded last week. His exit left two candidates in the race for the District 4 seat on the commission. Only James Loydd will participate, however, after his opponent Daniel Kreuger informed organizers that he would not participate.

Likewise, the three-way race for mayor will feature a gap as one candidate, High Point Church pastor and City Commissioner Jack Hilligoss, 56, has withdrawn from the forum, leaving former commissioner Curtis Gibson and political newcomer Tammy James to discuss the issues with voters. 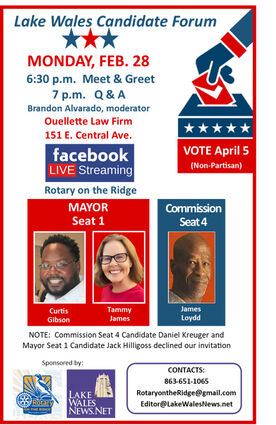 Gibson, 37, an insurance adjuster, left his commission seat last year with the announcement that he would seek to return as mayor. He has mounted a year-long campaign.

James, 58, is a consultant for the WWF, an environmental organization. She and her husband recently purchased the Friedlander building with the intention of restoring it to house apartments and a retail business.

The commission race will pit Loydd, 49, a longtime youth football and basketball coach and former Highlander standout, against Kreuger, 75, who is retired. Kreuger's only comment to the press so far has been that he is a "Frederick Douglas citizen."

Those wishing to watch the 90-minute forum may do so through the Facebook page of Rotary on the Ridge.