"State of the City" is Good, Mayor Says in Annual Report 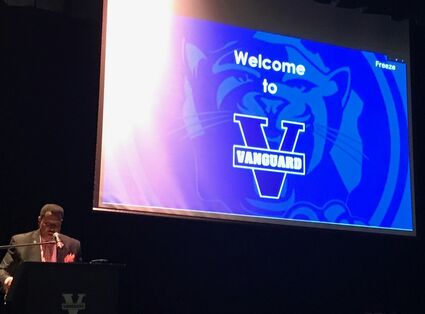 Mayor Gene Fultz delivered his final "State of the City" speech Friday in a darkened auditorium at Vanguard School. Fultz is leaving office after nine years as the city's first elected mayor.

A portrait of a city undergoing numerous changes was delivered to about 100 community and business leaders Friday at the annual "State of the City" report delivered by outgoing Mayor Gene Fultz in a darkened auditorium at the Vanguard School. It was the first opportunity for him to deliver the speech since 2019 due to the impacts of Covid-19. He will be leaving office this year after nine years as the city's first elected mayor.

Citing an aggressive pursuit of improvements and opportunities, Fultz offered a 45-minute compilation of new businesses, city investments, and planned actions initiated during 2020 and 2021, including city purchase of the YMCA to provide swimming facilities and training to residents.

"Staff had to invent new ways to interact," Fultz told the luncheon guests, but saluted the return of public celebrations including Pioneer Days and the Independence Day Celebrations.

Book lockers at the public library were among those changes, as were on-line building permit applications. The library and Lake Wales History Museum have now reopened for in-person visits. Fultz also mentioned that the museum has now transitioned to the control of a not-for-profit organization.

He mentioned pending major projects, financed by an $18.5 million bond issue backed by Community Redevelopment Agency revenue, including the Park Avenue connector trail and the major street reconstruction planned for Park Avenue and First Street. Those projects, part of the Lake Wales Connected plan, are being enhanced by additional improvements planned for Crystal, Orange, and Central Avenues. Some of that work is expected to be funded through the Federal infrastructure investment act.

Fultz saluted the city's partnership with Lake Wales Heritage in educating the public about the city's history as a "Garden City" designed by visionary landscape architect Frederick Law Olmsted Jr. His work formed the philosophical inspiration for the Lake Wales Connected plan. Fultz stated that more than 1,000 new landscape plants have been installed this year to beautify the city.

The city and Lake Wales Heritage will co-host a major event called "Olmsted Day in the Park" on April 30 in Lake Wailes Park.

Police body cameras were mentioned as an improvement in service and have already been proven useful in at least one instance, he said, while saluting the work of police liaison officer Sgt. Ed Palmer in working to improve communications and respond to complaints.

The luncheon was the "swan song" speech for Mayor Fultz, who will leave office in early May following City Elections on April 5. Three candidates are seeking to replace him.