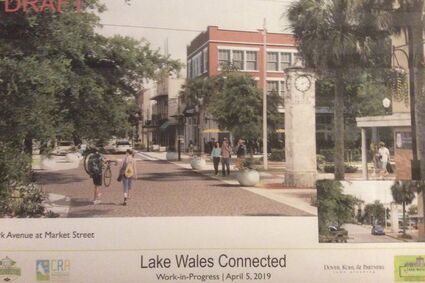 Main Street funded the development of the Lake Wales Connected plan which is being implemented by the CRA. The plan builds upon the historic work of landscape architect Frederick Law Olmsted, which was funded in part by Edward Bok.

Some 100 guests and supporters of the Lake Wales Main Street gathered Monday morning for a 90-minute session and left filled with not only lunch but inspiration.

City planner Ed McMahon visited Lake Wales from his home in Maryland to tout the assets and potential of the city, which is facing unprecedented growth. McMahon is a Senior Resident Fellow at the Urban Land Institute in Washington, DC.

"People in small towns don't like change," McMahon told the assembly, including city staff. Change is going to happen, he said, asking "Do you want change on your terms, or somebody else's terms?"

"The best way to predict the future is to create it yourself," he added.

Sponsored by the active downtown group, McMahon was introduced by Main Street Director Karen Thompson, who told the group that the challenge in Lake Wales is not so much the touted "placemaking" as it is "place-keeping."

McMahon shared a fast-paced set of images depicting cities converted from failing industrial hubs and low-income neighborhoods to popular gathering places and success stories. He shared his own stories of growing up in small-town Alabama before his military career led him to Europe, which he described as life-changing.

"To travel is to learn," he said, sharing stories of towns that offered huge inducements to major employers only to fail to benefit. "Image is critical to economic vitality and quality of life," he added.

McMahon told city leaders that creating a place that people want to be is at the heart of a community's success. Young people no longer graduate college, find a job, and get assigned to a location, he said. They find where they wish to live, go there, and then find a job.

"The fastest-growing mode of travel in the United States is the bicycle," he told the group, sharing how Amazon moved their headquarters to the center of Seattle from a suburban location. "Before you could only get there by car. Now you can arrive by public transit, on a bike, you can even walk. There are thousands of people living within a few blocks" of the giant complex of offices.

"A city without a past is like a man without a memory," he said, suggesting that city leaders find out what makes Lake Wales unique and build upon it. That suggestion fit nicely into the city's Connected plan, which was created through a Main Street program funded by private donors and builds upon the unique cachet of its origins.

Lake Wales was conceived as a "garden city" and enhanced by the work of Frederick Law Olmsted Jr., Edward Bok, August Heckscher, and other philanthropists. Broad central park spaces and public lakeshores set it apart from most Florida communities.

"It's hard to be a suburb of nothing," McMahon said, describing how city leaders too often fail to grasp that the history of their city is what creates the image and value.

McMahon compared the economic impact of mixed-use developments to new big-box retail outlets, saying the benefits of the former are many multiples of the latter. "Retail on the ground floor, residences above, and you generate thousands of dollars in tax revenue per acre," he said, while big-box stores and parking lots often generate $25 per acre.

"Do you want to design a place for people, or cars?" he asked.