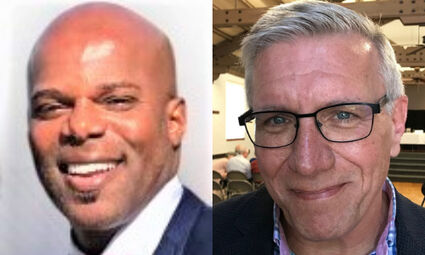 Given an opportunity to help heal the community after a divisive search for a new charter school superintendent, two city commissioners said "no."

A resolution presented to the city commission Tuesday night by Deputy Mayor Robin Gibson offered a welcome to the incoming Superintendent Dr. Wayne V. Rodolfich, who was chosen after a nearly year-long process. Commissioners Jack Hilligoss and Daniel Williams voted down the resolution, which failed on a 2-2 vote in the absence of Mayor Eugene Fultz.

"I was surprised. I thought the Resolution would be non-controversial and give the city a chance to welcome our new superintendent and his family to Lake Wales" said Deputy Mayor Robin Gibson, who is also attorney for the Lake Wales Charter Schools Board of Trustees.

Offered a chance to explain their votes, neither Hilligoss nor Williams did so, Williams responding simply "no comment." The vote came only a day after Hilligoss, a candidate for mayor, told a forum audience that he was "a leader" and pointed out that our city charter says the mission of the city is "to serve and unify the citizens of Lake Wales."

During the meeting at which Rodolfich was selected, many citizens who spoke called for healing and unity in support of whomever would be chosen by the Board of Trustees.

Rodolfich comes to Lake Wales from Pascagoula, Mississippi, where he was named the state superintendent of the year in 2020. He led successful efforts to build his system there, including the construction of a state-of-the-art fine arts facility in the aftermath of Hurricane Katrina.

Rodolfich had been the top-ranked choice of the search committee despite apparent bonds of friendship that led to the promotion of local candidates, none of whom had superintendent experience.

"I'm not on social media, and probably should have known that there is some lingering division," Gibson told LakeWalesNews.Net. "It looks like Dr. Rodolfich will have to prove himself to some of our citizens. I believe he is more than capable of doing so."

By City of Lake Wales

The text of the defeated Resolution appears below

COUNTY, FLORIDA, SUPPORTING THE Lake Wales Charter Schools AND ITS

WHEREAS, it is the mission of the City of Lake Wales to make our community “a bit

better or more beautiful for our having been here”; and

WHEREAS, the Lake Wales Charter Schools System is a vital element for making

our community better; and

WHEREAS, the Board of Trustees of the Lake Wales Charter Schools has selected

Dr. Wayne V. Rodolfich to serve as the Superintendent of the Charter School system; and

WHEREAS, it is in the best interests of the Lake Wales community to rally behind

and support the efforts of the newly selected superintendent, Dr. Wayne Rodolfich,

NOW, THEREFORE, BE IT RESOLVED by the City Commission of the City of

Lake Wales that it fully supports Superintendent Dr. Wayne V. Rodolfich as he leads the

best in public education to our community.”

For a mayoral candidate (Mr Hilligoss) who wants to ‘unite’ the community, his no vote and non reason behind it is disheartening. I don’t know the charter’s candidate, however I’m sure that after a year of searching and from what I’ve read about him, I would have liked to see him given a chance.

As a retired educator of 20 years, I welcome the new Superintendent who sounds like he has the experience and eye on innovation that is needed to guide the Lake Wales Charter School system forward. Perhaps Commissioners Hilligoss and Williams could use a lesson in manners. For the sake of the students, the new Superintendent should feel that he is welcomed and valued in this community.