Lake Wales Heritage Funded the Project as Gift to City 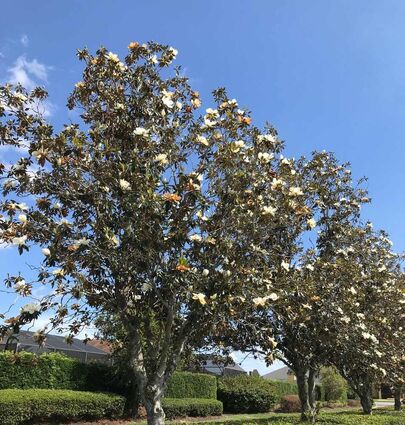 Showy Magnolia trees once again grace Lakeshore Boulevard, marking Lake Wales as a special place, a "City in a Garden,"

Volunteers and supporters gathered Saturday morning in Lake Wailes Park to mark the dedication of 34 young Magnolia trees which were planted on Friday, April 8 along Lakeshore Boulevard.

The trees were a gift to the citizens of Lake Wales from Lake Wales Heritage, which is actively re-planting the lost trees of the landscape plan for the city, which was designed by famed landscape architect Frederick Law Olmsted in 1930.

Olmsted played a central role in the development of Lake Wales as a garden spot, creating the plans for Mountain Lake, scores of private homes, and Bok Tower Gardens before creating the city plan. His previous work and that of his father had already helped transform hundreds of American cities, creating interconnected park systems and preserves that are cherished today, including New York's Central Park, Washington DC's Rock Creek Park, The Biltmore Estate in North Carolina, and the Niagara Reserve at the famous falls.

After Olmsted completed the streetscape design, city fathers retained his planning firm to write the growing town's first zoning ordinances, leaving Lake Wales with a unique status as the only Olmsted-designed city in Florida.

Heritage is also hosting the upcoming "Olmsted Day in the Park" with the City of Lake Wales to both celebrate the community's defining Lakeshore parks and educate citizens about the history and impact Olmsted made upon the town. That April 30 event will feature a full day of music, food, games, and activities for the entire family.

"We'll have everything arranged to allow parents to relax and enjoy the Rotary beer garden while the kids burn off energy and learn something new about their hometown," said Heritage Vice-President Nicole Sealey, who heads the group's educational efforts.

The flowering trees that now grace the length of Lakeshore Boulevard's western stretch, replacing the missing trees from the historic Olmsted landscape. The original trees, planted more than 90 years ago, were mostly lost to hurricanes over the decades.

The project was funded by Lake Wales Heritage. The local group is partnering with the City of Lake Wales to help restore the historic "City in a Garden" streetscapes designed by famed architect Frederick Law Olmsted Jr. at the encouragement of Edward Bok. The details of that original effort are only now coming to light.

"We were really pleased to be able to move forward with this phase of the planting," said Heritage President Robert Connors. "The community and residents have been very supportive of the effort." The trees were planted on April 8 at a cost of more than $11,000. 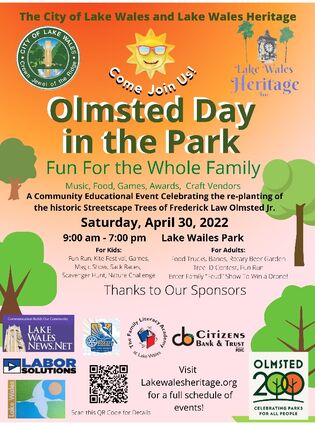 Olmsted Day will feature an all-day celebration in the park with a goal of both entertaining and educating residents about the city's history. Scores of prizes will be offered in a number of games and contests for both children and adults, including a quadcopter drone and flowering trees.

Lake Wales Heritage expects to continue the replanting program, which may prove to be a multi-decadal effort depending upon the group's ability to raise funds and grants. The magnolias represent the second stretch of street replanted following the installation of thirty blooming lemon bottlebrush trees on 4th Street last September. Those trees have been faithfully tended by volunteers led by Heritage director Preston Troutman. None have been lost.

The new trees will span from North Wales Drive to Polk Avenue, joining the 11 surviving trees from Olmsted's original work. Their large, fragrant blossoms are expected to add a new touch of grace to the boulevard.

"Some of the original trees were lost to disease, and a few actually to the acts of man," Connors said. "Olmsted's plan included a signature tree for virtually every street in the city, but most were never planted because the Great Depression intervened." Edward Bok had concealed the fact that he had paid for Olmsted's design work, afraid that every city in Florida would expect his to grant them the same service.

They look beautiful. Thanks.