Center Would Occupy the Now-Remote Corner of South 11th Street 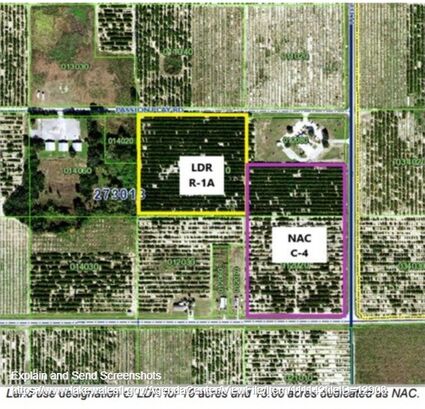 Broad swaths of citrus groves on the city's south side have been approved for new housing projects, which has motivated the proposal for the acreage marked in red on the map to become a "Neighborhood Activity Center." The parcel is bordered by Hunt Brothers Road, seen along the bottom of the site, and South 11th Street, on the right of the tract. The 10-acre parcel marked in yellow will be set aside for housing, joining all the lands north of that site as future housing sites.

The Lake Wales City Commission will vote Tuesday on a proposal that will allow construction of a new "neighborhood" shopping center at the currently-remote corner of Hunt Brothers Road and South 11th Street.

The conceptual development plan for the 13.66 acre site on the northwest corner of the intersection will be considered by the commission at Tuesday's 6:00 pm meeting.

The proposal is being submitted by the McKenna Family, owners of the two parcels, and represents the new southernmost extension of the city limits. It will be accompanied by an adjoining 10-acre parcel proposed for new housing. Both parcels are currently in citrus, as are hundreds of acres included in a half-dozen other developments proposed for the south side.

The Neighborhood Activity Center (NAC) designation on the city's Comprehensive Plan map and the accompanying C-4 zoning would permit "small-scale convenience goods and personal services." It would occupy the land south of the existing facility owned by the "Congregation of Jehovah's Witness," according to the city staff report.

The application summary presented by the Development Services Division says the commercial use "provides a transition from the existing residential homes on the west (and) from the industrial lands to the east."

The cited industrial use is the closed Hunt Brothers Packing House located about a quarter-mile away. It is anticipated that a new industrial use may be found for that facility.

The 10-acre parcel proposed for housing lies to the west of the Jehovah's Witness property and adjacent to the former location of the Black Hills Passion Play. It is proposed for low-density residential, common for standard-lot subdivisions. It is also adjacent to other new approved subdivisions that are planned to fill the entire swath of the city's south side from east of the Wal-Mart center to Scenic Highway and the south side of Lake Belle.

This development would be the first to extend as far as the east-west segment of Hunt Brothers Road, almost contiguous with the Village of Highland Park.

Just north of this location is an under occupied shoppping center with paving, utilities, and buildings already in place, why do we need a new one? Somebody needs to follow the money trail on this one.

While I appreciate the need for new development in Lake Wales, Shouldn't the emphasis be on the existing deteriorating shopping centers around the City -- What is being done to encourage updating those?