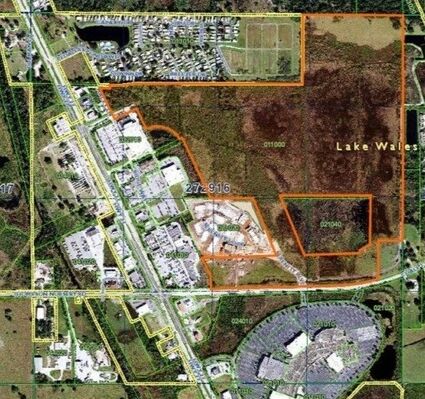 This sprawling site of more than 195 acres, outlined in orange, may be zoned for high-density development at Tuesday's meeting, allowing for the construction of potentially more than 4,000 new apartments. Eagle Ridge Mall is at the bottom of the image, US 27 along the left side.

EDITOR'S NOTE: This story has been updated to include clarifying comments from City Manager James Slaton.

While the land could, under high-density rules, accommodate over four thousand units, City Manager James Slaton, in a conversation with LakeWalesNews.Net staff, said that much of the site "Is undevelopable" due to environmental concerns. "We won't have actual numbers until the developer comes forward with site plans," Slaton said.

The land wraps around the existing site of Serenity Apartments. A swath of land owned by the corporation fronting on Chalet Suzanne, already zoned for commercial use, won't be included in the change.

The year-old Serenity Luxury Apartments filled rapidly at record prices in the area, some rental rates for larger units reaching nearly $2500 a month. Demand for housing in the area is driving a wave of development proposals unheard of in the area.

An R-3 zoning, coupled with an HDR map designation in the comprehensive plan, would allow up to 25 units per acre on the site, which lies just north of Eagle Ridge Mall. According to a Development Services staff report, "a portion of the site is contemplated for multifamily development; however, plans have not yet been submitted for review." 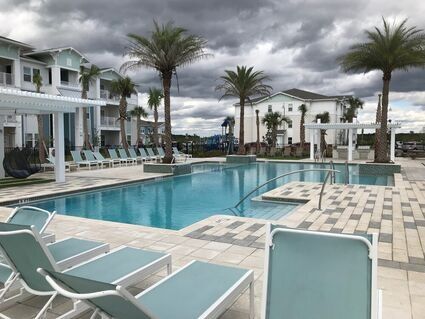 Future development of the site as apartments will require a Planned Development Project (PDP) which would require approval by the Planning Board. The planning staff report states that the R-3 zoning "is appropriate as adjacent property to the east is zoned R-3," essentially stating that apartments are "a more appropriate transitional zoning from commercial to the west and residential to the east."

The city's zoning codes state that R-3 zoning "is not intended for use on large tracts of vacant land." The apparent discrepancy is not explained in the staff report. R-3 can also be used for "single-family, two-family and multiple-family dwellings, on infill lots in multi-family neighborhoods," according to the zoning codes.

Star Lake, Inc. is owned by the Bice family, which has held the property for many years. Portions of the former cattle ranch are the current locations of Kohls and Shoppes on the Ridge, as well as Serenity Apartments.