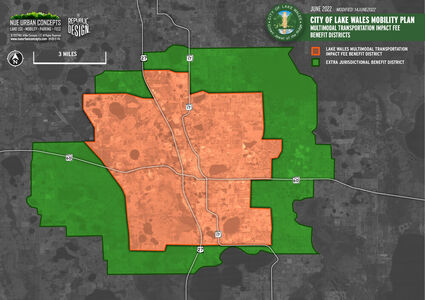 The city's expected growth was demarked in a series of maps shared by the consultant in the study. The tan area is the primary service area to be considered, while the green area could benefit with project expenditures if shown to benefit the urban assessment area.

Faced with a expected wave of new development after approving more than a dozen new housing projects in less than a year, the Lake Wales City Commission on Tuesday unanimously approved a new "Mobility" impact fee that will add $2,055.33 to the cost of new home in the city. Funds raised by the fee may be used for a wide variety of improvements, including sidewalks, trails, lighting, and street trees in addition to the standard road funding.

Prepared by consultants NUE Urban Concepts, the plan studied the entire Lake Wales "Utility Service Area," encompassing the region that may eventually be incorporated into the city limits, in order to determine the impacts of future travel demand. The measure was the subject of a presentation lasting over an hour at last week's commission workshop session.

The city has for many years collected a Polk County "Transportation Impact Fee" that is passed on for county use but restricted only to vehicular traffic improvements. The city's new fee, the result of a study approved in November, uses an innovative structure and findings to justify an ordinance that broadens the defined uses.

The city fee will be funded entirely by new construction and be paid at the time a building permit is drawn and added to the range of existing impact fees charged by the city for police, fire, library, parks, and other services. The fees are designed to avoid having existing residents subsidizing the cost of providing services to new residents.

Townhome, villa, duplex, and triplex construction will be charged $1,569.29 per unit. Multi-story buildings will see lower fees per unit.

Commercial development will also share in the new fees, which will range from $.62 per square foot for a category including industrial and warehouse space up to $3.28 for a retail and restaurant category. Outdoor recreation spaces will be charged by the acre. 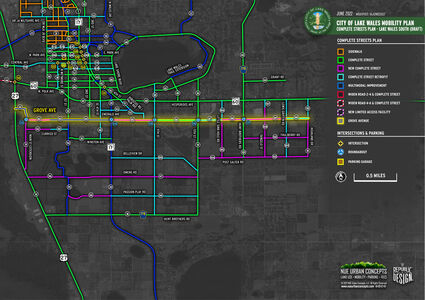 A grid of projects that may be considered in the city's core areas includes multiple pedestrian and bicycle trails, along with a potential route for buses.

During the workshop the commission viewed a series of images showing existing conditions and the proposed improvements that may be considered for funding in response to the growing needs created by the new development. New pedestrian trails, landscaping, lighting, turn lanes and traffic circles are among needs that were included in the list. The study highlighted the multiple modes of travel beyond automobiles, including bicycles, golf carts, and micro-buses and shuttles used to move people to their destinations.

Among the proposals suggested was an improvement for a Grove Avenue "corridor" that would serve as an alternative to highway 60, connecting the city's east side with US 27. No explanation was given as to how the route would span the Mid-Florida railroad, Southgate Shopping Center, or Twin Lakes, all of which divide that path.