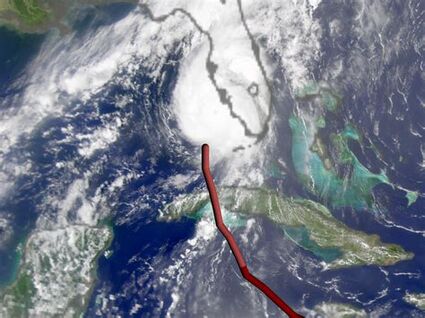 Hurricane Charley landed a sharp left hook on Florida, intensifying from a Category 2 to a Category four storm in less than 24 hours after crossing Cuba. It struck land with 145 MPH winds, and reached Lake Wales with little warning only five hours later.

Saturday, August 13 marked the 18th anniversary of the most destructive Hurricane to strike Lake Wales in recent memory, and thankfully the tropics remain quiet so far. Only a weak disturbance drifting westward near Texas is being remarked upon by the National Hurricane Center.

The Friday the 13th storm of 2004 was the first of three direct strikes here in only six weeks, an event unprecedented in recorded history. Hurricanes Frances and Jeanne came evenly spaced, three weeks apart, The eyes of all three storms passed directly over Lake Wales, although the vast majority of the damage here was done by the first of the trio. Most of the city was left without power for more than a week, and most businesses were heavily damaged, along with the housing stock.

The Hurricane season runs from June 1 until November 30, but the peak of the season falls on September 10, based upon long-term records.

The August outlook offered by the National Oceanic and Atmospheric Administration reduced the expected number of storms only by one. That prediction now includes a total of 14 to 20 named storms, of which only three have occurred.

In response to questions from LakeWalesNews.net, Matthew Rosencrans, lead Hurricane season outlook forecaster at NOAA's Climate Prediction Center, acknowledged that an anomalously-strong Atlantic high pressure area, often referred to as the Bermuda High, has been a factor so far this season, depressing activity far to the south. The most recent Atlantic-basin storm, in late June, skirted the coast of South America and entered the Pacific Ocean across Honduras.

The position of the high, sea-surface temperatures, and outbreaks of African dust crossing the Atlantic are factors in the long-term predictions, which do not include any outlook of landfalling storms in any particular location. The recent dust arrivals from Africa have helped to suppress storm development from that direction, but that process normally ends in July.

As the 2022 Hurricane season rolls on to it's expected September peak, a map of Polk County Public Shelters shows that of the 47 shelters listed, only one is located in southeast Polk County, an area stretching east of US 27 and south of Waverly Road from Lake Kissimmee State Park to the Highlands County line, and including a population of more than 80,000.

Spook Hill Elementary School is the only public shelter for the vast area, which has also previously hosted waves of refugees fleeing storms threatening the Florida east coast.

The 2022 map includes 47 shelters, and designates three "Special Needs Shelters" for residents with medical or physical conditions that require special assistance. Those are located in Bartow, Davenport, and Lakeland. Pre-registration for these shelters is highly recommended, by contacting Polk County Emergency Management (PCEM) at (863) 298-7027.

According to the press release accompanying the map, three shelters are designated "Pet Friendly." They are limited to accepting dogs, cats and birds. Specific requirements apply at "Pet Friendly" shelters, so those needing shelter are asked to check those requirements in advance.

The public shelters maps are to be made available at Publix Super Markets in Polk County by the end of May, and area lodging facilities and chambers of commerce will also have maps on hand in the event of a storm..

It should be noted that not every shelter may be opened during a particular storm, so evacuees are advised to call a number printed on the map to confirm that a specific shelter has been opened before traveling to it.

"In the event a Hurricane threatens Central Florida, we will work closely with our accommodations partners to determine the supply of available rooms. This information is critical in helping evacuees find lodging," said Mark Jackson, director of Polk County Tourism and Sports Marketing (PCTSM). PCTSM relays this vital information to Polk County Emergency Management (PCEM) and area lodging facilities. PCEM uses this data to decide when and where to open shelters once area accommodations reach capacity. Evacuees can then be directed to open shelters using the map, which lists shelter locations and directions. The map also provides sources of emergency information, important telephone numbers and a list of recommended items to include in a "7-Day Survival Kit."

The Polk Hurricane shelter map shows an absence of shelters for much of the southeast county.

Polk Emergency Management recommends sheltering in place as the primary option during a disaster, and suggests that you plan to be self-sufficient for at least seven days during and after a disaster. You should anticipate no water, electrical power or utilities for that period of time. Public shelters should be the option of last resort, according to officals. In the event you decide you need to evacuate to a shelter, they strongly suggest that you bring a "7-Day Survival Kit" with you. Once in a shelter, you may not be permitted to leave until an all-clear is issued.

For information about emergency preparedness in Polk County, you are invited to visit http://www.polk-county.net/em.