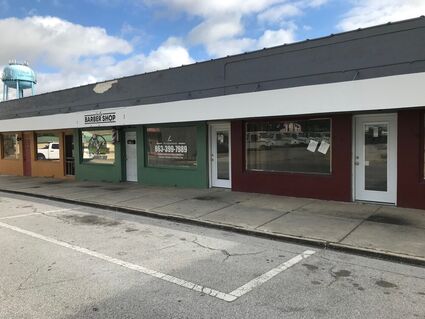 This building on First Street will soon host new food services if the plans of owners Stephen and Tammy James are realized. First to open is likely to be Smokin' DJ's, a barbecue ribs restaurant seating 25 to 30 indoors. Outdoor seating will also be offered.

Two new restaurants are being developed in the historic districts of Lake Wales, and both are receiving inducements from a special grant program.

Co-owner Jennifer Leeks told LakeWalesNews.net that they are tackling the extensive renovations required to convert the space into a fully-equipped modern restaurant with indoor seating for 20 to 25 diners, as well as sidewalk seating with umbrellas.

Plans by building owners Stephen and Tammy James include a future shared landscaped "food court" area behind the building, which may house up to three food-service outlets.

Leeks said that she and her husband, Demetrius Leeks, became aware of the possibility after the James' purchased the building in February with the idea of expanding downtown dining. Demetrius is a barber who has worked at a shop in the same building for many years. They were awarded a $50,000 matching grant in early August.

Also on the menu at Smokin' D's will be a "AAA Burger," turkey burger, and other sandwiches. Sides will include salads, seafood rice, banana pudding, and macaroni and cheese.

"Everything will be made from scratch," Jennifer Leeks said.

Hoping to inspire a food-driven renaissance in the downtown area and Northwest Neighborhood districts, the Lake Wales Community Redevelopment Agency (CRA) has been offering the grants for two years. 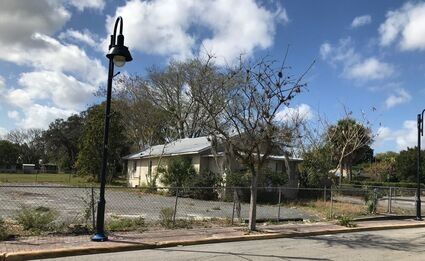 This building at the intersection of Lincoln Avenue and A Street is expected to be replaced by a new Whadda-Wings restaurant opening in 2023.

The CRA also recently awarded a $100,000 grant to Whadda-Wings toward the construction of an entirely new restaurant on Lincoln Avenue. That project involves tearing down an existing structure at the corner of A Street. That project is expected to take up to a year to complete.

Several previous Food Service Incentive grants have been approved, with mixed results. They include Melanie's Seafood and Wales Pointe restaurants on Park Avenue. Both received grants of up to $50,000.

On the same street is The Ranch, which was awarded $100,000. Originally billed as a taproom which would be an evening entertainment center to spark downtown nightlife, it now closes at 2:00 p.m. Another grant was offered to the Corner Café in the South Scenic building last year, but it has yet to be completed.

Meanwhile, three new fast-food restaurants are planned for the US 27 corridor.