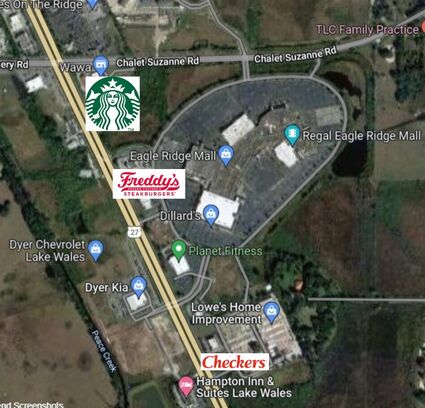 Three new fast-food franchises will be represented on the growing US 27 corridor in the future as Starbucks, Freddy's, and Checkers plant their flags near Eagle Ridge Mall.

While two independently owned and operated new restaurants are planned for opening on Highway 60, including Locorrito and Brake Burger Garage, and two more are planned to open on First Street downtown and on Lincoln Avenue, three more are aiming for construction on US 27 near the Eagle Ridge Mall.

All three new restaurants will be located on the east side of US 27, and will occupy among the last of the rapidly-filling mall outparcels.

A Starbucks coffee outlet is planned for a site just south of the Wawa gas and convenience store. The site will share access drives with Wawa and an adjoining office building. No timeline has been set for construction, but city officials have confirmed that the project is in the works.

Also pending site plan approvals and permitting are a Freddy's Restaurant and a Checkers, both in the fast-food restaurant category.

Freddy's Frozen Custard & Steakburgers® has become one of the fastest growing franchises in the U.S. It was started in 2002 with a single restaurant in Wichita, Kansas to more than 400 locations today, with nine in Florida.

The restaurant is planned for a site immediately south of the existing Chili's restaurant, with access from the mall drive. The Lake Wales location will be the first in Polk County.

Checkers Drive-in specializes in burgers and fries and is expected to occupy space next door to ABC Wine and Liquors, also facing US 27. It will share access with the south entrance to Eagle Ridge Mall.

The three new restaurants are expected to draw a significant portion of their business from travelers passing through the area, while providing more than 100 jobs in total, and contributing significant tax revenue locally.