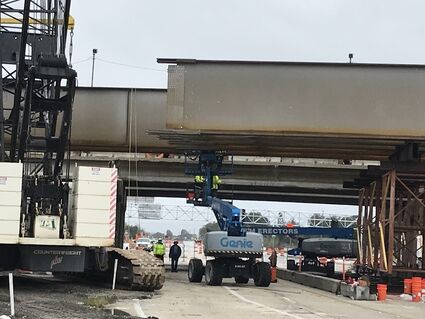 Setting massive steel beams over travel lanes will require the closure of US 27 again this weekend.

Traffic around the Lake Wales area will be snarled again this weekend as US 27 will be closed at the SR 60 overpass construction site all weekend.

The closure of the busy federal highway will allow construction crews to set the massive steel beams which will support the new bridge. Closure of the highway is planned to begin at 11:00 pm Friday and last until 5:00 am on Monday.

Elaborate detours will be in place for the multiple potential traffic movements that motorists will need to make, from north and south-bound to east and west-bound, and vice versa. Other detours will affect only heavy commercial trucks.

This is the second time the construction project has required closing the highway. The first effort in January revealed the bottle-neck points that locals will benefit from avoiding. They include the southbound to eastbound movement which requires drivers to follow Central Avenue to SR 60 and turn left across westbound traffic.

Another choke-point developed at the intersection of Winston Avenue and Scenic Highway (SR 17) where east-bound to south-bound traffic, including heavy trucks, were directed south on First Street before turning east on Winston Avenue. They were then delayed attempting the tight turn onto southbound Scenic Highway to head to Hunt Brothers Road and US 27 South.

All the routes will be marked with detour signs, and law enforcement will be on site to assist motorists. Florida Department of Transportation urges motorists to allow extra travel time and use caution in the construction zones.

The massive multi-year project to rebuild the former obsolete bridge and interchange has been ongoing of more than 18 months. Completion is expected to take place in 2025. The result will be a completely re-configured "single-point urban interchange" rather than the former half-cloverleaf design.

The closure is being done for obvious safety reasons, as few would wish to pass under a dangling steel beam weighing up to 90,000 pounds. The center segment beams alone are 107 feet long.

Each of the nine girders will be joined to form three continuous beams weighing 250,000 pounds and spanning 261 feet without center supports, eliminating the blind spots caused by the former center pillars supporting the old reinforced concrete bridge. 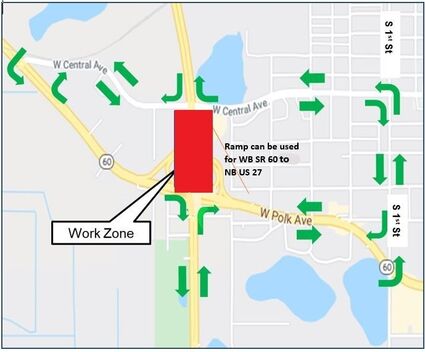 Various detours are required to route traffic around the intersection of SR 60 and US 27 this weekend.

The new bridge will receive a deck and be completed and ready to receive traffic in early 2023, marking a major step forward toward completion of the project.

An average of 32 workers are on site each day, according to Adam Rose, a Communications Specialist with the Florida Department of Transportation. Their work has been slowed recently by heavy rain and lightning, but the contractor remains on schedule to complete the job.

Following phases will include completion of the new ramps serving the intersection, which will be located beneath the spans.

New signage, lighting and other necessities are also included in the project. A wall designed as a noise barrier will be constructed at the south-west portion of the intersection. Landscaping is being designed in conjunction with the City of Lake Wales, according to Rose.