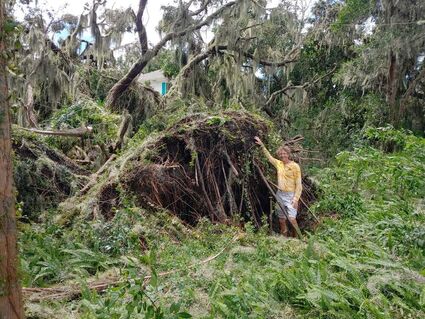 Lakeshore Boulevard resident Drew Truitt poses with a massive oak tree that was toppled by Hurricane Ian, leaving his two-story home barely visible in the background.

Downed trees, power outages, and significant flooding were the primary impacts of Hurricane Ian locally. No deaths or injuries were reported to local authorities. The storm weakened enough on its trip inland that it had weakened to a Category One Hurricane by the time it made its closest approach.

A limited number of buildings sustained wind damage, but it was largely limited to screen enclosures, fences, sheds, and mostly minor roof damage. More than 21 inches of rain was recorded in some locations around Lake Wales, causing many lakes to rise, and causing extensive flooding around area creek and river basins. Most homes escaped damage.

Hundreds of electrical lineman and contractors from as far away as Illinois and New England descended on Florida, and by midday Saturday most power outages had been restored. A few areas were fortunate to maintain power throughout the storm, which arrived with worsening winds during the day and evening on Wednesday. The closest approach of the eyewall came shortly after midnight when it was only a few miles to the southeast of Lake Wales after a zig-zag approach. It then passed eastward, arriving at the east coast by dawn. Winds locally subsided to breezy gusts before noon. 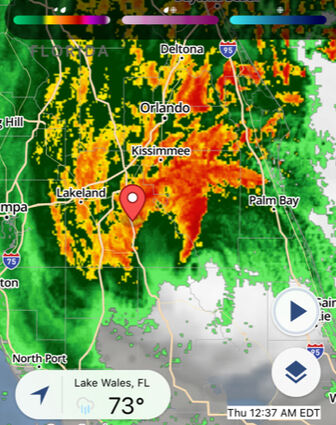 A 12:37 am radar image shows the center of Hurricane Ian centered near Frostproof, leaving the Lake Wales area under the eyewall and a band of torrential rain.

Among the serious effects was a wash-out of Scenic Highway (SR 17) near tiny Dollar Lake, south of Emerald Avenue. Traffic will be detoured around the area while Florida Department of Transportation crews and contractors make repairs.

A number of "grandfather" Live Oaks were uprooted, with one blocking South Lakeshore Boulevard before city crews removed it. Other trees fell in private yards throughout the area.

Some homes received roof damage, and insurance adjusters were welcomed sights for homeowners as they dealt with water damaged interiors. An influx of autumn-like cool and dry air followed the storm, making the aftermath and clean-ip much more pleasant for many.

The Hurricane season extends until November 30, but the peak is now well past, and there are no further threats on the horizon at this time.