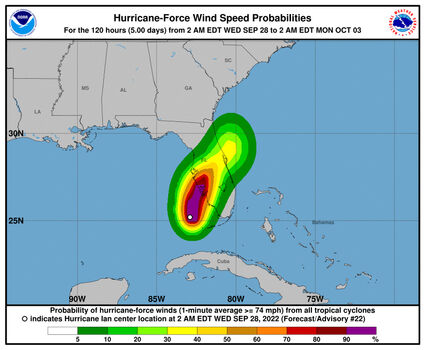 Hurricane Force winds are expected to approach the Lake Wales area by tonight.

WEDNESDAY 5:00 PM UPDATE: NOAA Doppler radar imagery indicates that the eye of Ian has made landfall on the mainland southwest Florida peninsula just south of Punta Gorda near Pirate Harbor. Maximum sustained winds at landfall were estimated to be 145 mph (235 km/h). They are now estimated to be 140 mph.

A WeatherSTEM station at the Cape Coral Fire Department recently reported a wind gust of 110 mph (177 km/h). A WeatherFlow station in Grove City on the western side of Charlotte Harbor reported a sustained wind of 85 mph (137 km/h) with a gust to 128 mph (206 km/h).

The eyewall is now ashore, moving steadily in our direction. Radar indicates that a band of squally weather is about to spread over the Lake Wales area.

The center of the storm is now just west of Sanibel Island and it continues to track toward Lake Wales, expected to make landfall near Englewood. After that time the storm should begin to slowly weaken. Forward motion remains slow, about nine MPH.

The squalls that are currently passing over Lake Wales will continue during the afternoon, gradually increasing in intensity to Tropical Storm force. The eye is expected to pass over the city between 2:00 and 5:00 AM, leading to about two hours of calm if it passes with its full breadth. DO NOT VENTURE OUT DURING THE CALM. The winds will return suddenly from the opposite direction.

The city and surrounding areas are expected to be exposed to winds of up to 135 MPH sustained with higher gusts during the night. There is also an enhanced chance of tornados in this area.

At 800 AM EDT (1200 UTC), the eye of Hurricane Ian was located by Air Force and NOAA Hurricane Hunter data plus Key West radar near latitude 26.0 North, longitude 82.7 West. Ian is moving toward the north-northeast near 10 mph (17 km/h). This general motion with a reduction in forward speed is forecast today, followed by a turn toward the north on Thursday. On the forecast track, the center of Ian is expected to move onshore within the Hurricane warning area later this morning or early afternoon. The center of Ian is forecast to move over central Florida tonight and Thursday morning and emerge over the western Atlantic by late Thursday.

The eye of Hurricane Ian is forecast to pass over Lake Wales.

In addition to high winds, the storm is expected to bring 10 to 15 inches of rain locally, leading to flooding of low-lying areas.

Currently centered just west of Marco Island, Florida, Ian has regained wind speeds of 120 MPH after crossing Cuba. Further intensification is expected during the next 24 hours.

Ian is now on a northerly course and is expected to begin a turn toward the North North-East toward west Central Florida and the Lake Wales area. Current radar images indicate that a slight easterly component to its movement may have already begun.

The official forecast track now brings the center of the storm ashore as a Major Hurricane along the coast of Sarasota and Manatee Counties. That course would bring the powerful winds of the eyewall over Polk County as it moves inland. Slight deviations in that course can bring significant changes in impacts. Slow and erratic movement is also likely according to some models.

The NHC reports that an expanding wind field is also an element increasing the threat to east Polk County. Ian's eye is 25 miles in diameter, and Hurricane-force winds extend outward up to 40 miles (63 km) from the center, while tropical-storm-force winds extend outward up to 175 miles (280 km). That puts the Lake Wales area under the threat of hurricane-force winds late Wednesday through Thursday as the storm lingers over the area. Widespread six to ten inches of rain and localized totals of up to 15 inches are expected here, leading to flooding of low-lying areas.

Residents are encouraged to continue preparations and to monitor the progress of the storm, and are reminded to remove and store small objects, including potted plants and garden lights, which may become airborne projectiles..

Among the local threats is the possibility of torrential rain, with our area given at least a 40% chance of flash flooding. Sandbag materials are available at Lake Wales Park near the athletic fields and Crystal Avenue. A single Hurricane shelter has been prepared to serve southeast Polk County, located at Spook Hill Elementary but it is not scheduled to open Tuesday, according to county officials.

LakeWalesNews.net will continue to update this story every three hours with the latest information available. 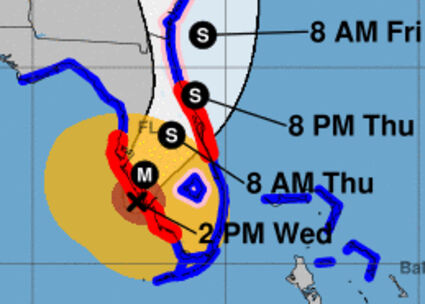 Lake Wales area residents and Floridians in general are beginning preparations for the likely impact of a Hurricane beginning in less than four days. The official forecast shows the storm reaching the Tampa Bay area by 2:00 Wednesday, or potentially moving on to the panhandle of the state by 2:00 am Friday.

According to the National Hurricane Center in Miami, the cyclone remains over warm 29-30 C waters. Hurricanes are fed and strengthened by warm waters. Water temperatures in the Atlantic basin and Gulf of Mexico are generally much warmer than historic norms.

LakeWalesNerws.net will closely monitor the approach of the cyclone and will continue to publish frequent updates with specific information for the local area. Please return to our news section to take advantage as advisories are released.