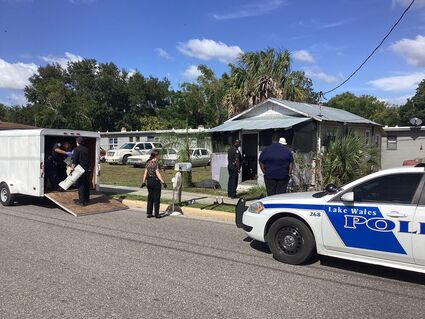 Lake Wales Police officers carefully removed the personal belongings of the current residents of the home on Wiltshire Drive the may conceal the remains of Debbie Williams, missing since 1990 and suspected of having been murdered at the scene.

A search for closure for the family of Debbie Williams, listed as a "missing person" since 1990, took a major step forward on Tuesday as City of Lake Wales engineering contractor Semco began an investigation of the structural integrity of an aging frame house on Wiltshire Drive. Lake Wales Police were supporting the effort, removing personal belongings from the house to be stored, allowing for the removal of flooring. The current residents of the home are not part of the investigation, but have been cooperating with police to help solve the mystery. 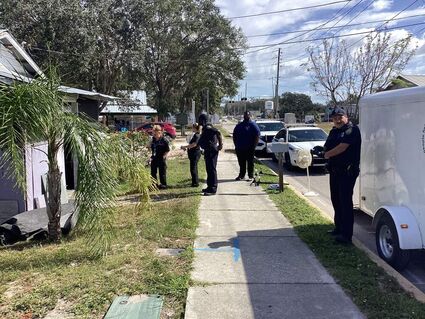 Police officers monitored the removal of furnishings from the scene to allow Semco Construction employees to evaluate the structural stability of the house before excavating underneath it.

As LakeWalesNews.net reported in a detailed story last week, rumors regarding the case reached the ears of retired Lake Wales Police Supervisor Melvin Waldron in 2019, triggering earlier efforts to find Williams, remains. Those rumors indicated that she had been a victim of domestic violence and had been buried under the floor of the house.

A site visit 12 days ago by the Peace River Search and Rescue team, using soil testing and dogs trained to respond to cadavers, provided the latest evidence in support of the rumors. Lake Wales City Manager James Slaton subsequently made solving the mystery a "top priority."

According to Lake Wales Police Detective Ricky Hartwell, Semco employees had begun an inspection of the house on Monday, and once the house is cleared of personal property they will remove flooring to further inspect floor joists and provide any desired bracing that will allow excavation of the property to proceed. "We will be back tomorrow to dig," Hartwell told LakeWalesNews.net at the scene.