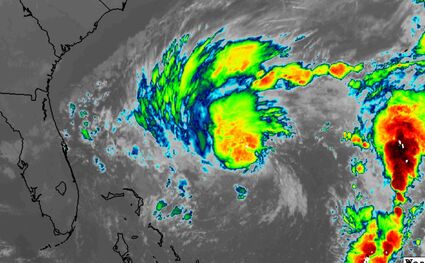 Nicole has developed an inner core of convection, marking its transition to a true tropical storm. It is expected to reach hurricane strength as it approaches the east coast of Florida. It will likely weakin before reaching the Lake Wales area.

The early morning forecast from the National Hurricane Center confirms that once Sub-Tropical Storm Nicole is transitioning to a Tropical Storm, and is likely to reach Hurricane strength as it moves through the northern Bahamas before impacting Florida's east coast. The change has implications for the Lake Wales area.

Still retaining the extremely-broad wind field of an extra-tropical system, Nicole is now developing an inner core of strong winds, which will likely bring a swath of damage to parts of Florida. Storm surges and coastal erosion are the major threats for the state.

In Lake Wales, the expectation is that the storm will transition the area during the day on Thursday, with the center passing near or over the city. If the latest forecast track holds true, it may pass just north of our area, resulting in the strongest winds gradually backing from northeast to northwest, but keeping the city on the weaker, left side of the storm.

Likely scenarios bring winds of Tropical Storm force to our area, but little expectation of wide-spread power outages, according to experts. Two inches of rain, and up to four inches in some locations, are expected during the passage.

After Nicole exits the area, a significant cold front is expected to transit Florida, with the trailing cold air mass dropping morning low temperatures into the low 50's, with daytime highs only reaching the low 70's on Sunday.