"Evolve at Lake Wales" May Provide New Apartments Near Mall

One of Two Large Projects Being Considered by Commission 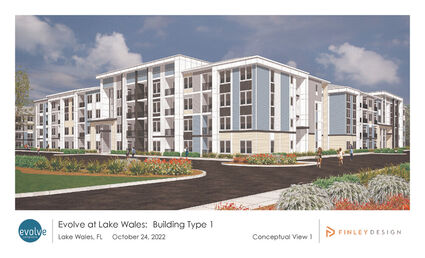 Evolve at Lake Wales is expected to consist of six four-story buildings containing 272 units, on the north side of Chalet Suzanne Road across from Eagle Ridge Mall.

A pair of proposed apartment developments near Eagle Ridge Mall may add 824 new dwelling units to the city, but in each case developer proposals to reduce required parking created some heartburn for city commissioners.

The first and most prominent of the pair is proposed for a site directly behind Shoppes on the Ridge, on the north side of Chalet Suzanne Road and across from Wawa. It would consist of six four-story buildings containing 272 units on a 12.1 acre site.

Tentative building elevations shared with the commissioners labeled the project as "Evolve at Lake Wales."

Access to the new complex would be provided from both Chalet Suzanne Road and Serenity Boulevard, which would become a connector street if a second proposed complex is built just to the north.

The proposal presented at the city commission workshop on Wednesday requested approval of eliminating the requirement for designated visitor parking and reducing total parking from 544 spaces to 477 spaces.

City planners have adopted a flexible attitude toward parking, suggesting that developers often know best what they need to keep clientele happy. The new flexibility results from the widespread policies of decades past which have resulted in vast acreage covered by unused parking lots.

"Where are all those people going to park?" asked Commissioner Terrye Howell during the board discussion, suggesting that many households own two cars. Howell suggested that the city should "make them pay" for city flexibility in the rules, saying that money could be used to build a gymnasium or other public amenity.

An ensuing discussion about the need for better bus service from the Citrus Connection to reduce dependence on private vehicles was ended after City Manager James Slaton indicated that it would be a separate negotiation.

The north-side corridor around the mall has been experiencing a boom of new development, with four new food-service businesses proposed on the heels of a new paint store, car wash, and Wawa store. The year-old Serenity Luxury Apartments, with 335 units, were filled in months.

If both proposed apartment projects receive approval at Tuesday's meeting Evolve may be constructed concurrently with the much larger Hillpointe complex nearby.

The picture of the new apartment building is very nice. It will fit nicely behind Publix and will be good for the shopping center and for Lake Wales. It also makes the area very walkable. I can't wait to see it built!