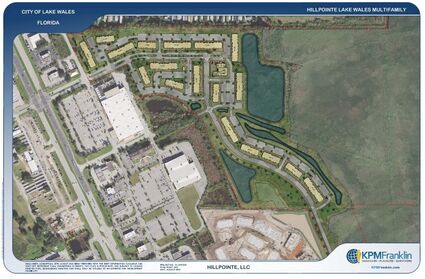 The site plan for Hillpointe Apartments includes 18 three-story apartment blocks plus a community clubhouse and amenity center. Most of the site will remain undeveloped.

Two new apartment complexes totaling 824 units may bring a burst of new economic activity to the city's booming north side. The Lake Wales City Commission will consider action on the two projects Tuesday after discussing the proposals at their agenda workshop.

Hillpointe, the larger of the two projects, is proposed to include 552 units 137 acres lying north of Chalet Suzanne Road and the existing Serenity Luxury Apartments. The construction would take place on the western-most portion of the site, adjacent to Shoppes on the Ridge, Kohls, and Home Depot. Most of the site would remain undeveloped wetlands and flood plain.

All of the apartments in the complex are proposed to be two-bedroom, two-bath, a configuration that is in high demand in the Lake Wales area. A shortage of rental units has driving housing costs higher and created long waiting lists for units at many complexes.

Among the agreements reached with the developers by city development services staff would be a long-desired connection between Chalet Suzanne Road and US 27 running behind Shoppes on the Ridge. Two new streets would allow traffic to travel from the north end of the shopping center near Home Depot to Chalet Suzanne Road, keeping congestion off US 27.

The connecting streets would extend Star Lake Drive from an existing signal near Wendy's eastward to connect to an extension of Serenity Drive. Hillpointe would straddle both new streets, and lie adjacent to Serenity.

Two apartment proposals were discussed at the city commission workshop on Wednesday, and both generated some heat. Hillpointe and a nearby proposed development called Evolve at Lake Wales have each requested waivers that would allow them to eliminate required designated visitor parking and reduce parking overall. City planners have adopted a flexible attitude toward parking, suggesting that developers often know best what they need to keep clientele happy. The new flexibility results from the widespread policies of decades past which have resulted in vast acreage covered by unused parking lots.

Under the proposal from Hillpointe, LLC, parking at the development would be reduced from 1,104 spaces to 835 spaces, and the requirement for visitor parking would be waived.

"Where are all those people going to park?" asked Commissioner Terrye Howell during the board discussion, suggesting that many households own two cars. Howell suggested that the city should "make them pay" for city flexibility in the rules, saying that money could be used to build a gymnasium or other public amenity. 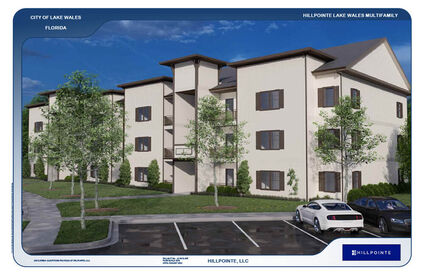 A lack of housing in the area of the Eagle Ridge Mall has been a shortcoming that has likely sped its slow decline. Once a driver of economic growth, the mall has struggled to recover from the effects of the 2008 "Great Recession" and the closing of major anchors including Sears and JC Penney. Increased density resulting from new apartment development is expected to help increase foot traffic there.

The Lake Wales Community Redevelopment Agency is conducting discussions with Polk County that may allow the mall to be added to their redevelopment boundaries, allowing for public support of creative reuse of vacant buildings and land there.