Highlanders Senior Quarterback Trent Grotjan spoke to the LakeWalesNews.net about the prospects for the upcoming state title game against Daytona Beach's Mainland Buccaneers.

The Lake Wales Highlanders won their semi-final football game Friday night and will face the Mainland Buccaneers of Daytona Beach in the state Class 3S Championship game, which will be held in a neutral stadium on December 16. Game time, tentatively set for 11:00 am, has yet to be confirmed by the Florida High School Athletic Association.

The Lake Wales Highlanders moved to 14-0 after defeating the Columbia High School Tigers by a score of 37-7 under the lights of Legion Field.

The Tigers became semi-finalists after defeating Choctawhatchee in their North Florida region but struggled to stop the Highlanders' explosive attack.

UPDATE: Championship Game Will be Televised

A 44-yard run by Tigers' QB Tyler Jefferson provided the major fireworks for the visitors in the opening minutes of the game.

Corey Harris Jr. led the running attack for the Highlanders in the first half with bursts of 14, 16, 16. and 17 yards. Jordan Henderson, Carlos Mitchell, and Lake Wales Quarterback Trent Grotjan added their own substantial gains on the ground and through the air in a balanced offense.

Grotjan was a constant threat, throwing for big gains, but a single interception was his fifth on the season.

Jaramiah Anglin returned the favor three plays later at the Tiger's 17, picking off a toss from Tigers' QB Tony Fulton, one of four players who took snaps for Columbia.

The explosive Harris Jr. promptly ran for 17 yards., and two plays later added 16 more, moving into Columbia territory at the 43. Richardson added nine more on the next play, and then added two for a new set of downs at the 32.

Grotjan ran a 14 yard keeper to the 15-yard line, Harris ran it up the middle to the 6, and then added a grinding yard for a first and goal at the 5 before punching it in. That mix was typical of the Lake Wales squad's ground attack.

Mauricio Alvarez added the conversion kick, and the Highlanders were on top with two minutes left in the period.

A Fulton bomb that was picked off by the Highlanders' Phillip Davis at the 15 led to the next Highlander score. That came on a 45-yard option pass from Grotjan to Mitchell. The Highlanders would never look back, running the tally to 28-0 on a TD reception by Xavier Marlow before the Tigers got on the scoreboard.

Johnquae Richardson ran a 25-yard burst in the opening drive of the second half, which ended in the first of kicker Alvarez's trio of field goals, from 36, 37, and 38 yards.

In addition to Fulton, Zaccheus Paulk, Jayden Jackson, and Evan Ulmsted each had their opportunities to make the big plays for the Tigers at QB. They were generally stymied, but most of their biggest gains came on QB keepers, necessitating the rotation as the ball carriers were punished by Highlander tacklers.

The Highlanders' special teams work was again porous, allowing long returns including a 50-yard kickoff return in the second half into Highlander territory.

Daytona Beach Mainland is now the only obstacle standing in the way of the Highlanders' first state championship in generations, having made it to the title game at least twice in memory.

The Buccaneers have a dangerous passing attack, having scored 31 passing touchdowns on the year, nearly triple the national average among high school teams. Senior Quarterback Damarcus Creecy had thrown for 2696 yards through 13 games on the season. 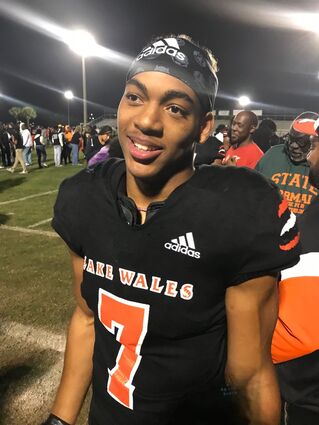 The Highlanders' dynamic running back Corey Harris Jr. took time to relax and savor the win Friday night after making a major contribution, moving the Highlanders into the state championship game next week in Fort Lauderdale.

The air attack will be met by a squad of Highlander defenders, led by Anglin, Marlow, Mitchell, and Phillip Davis, who have intercepted opposing quarterbacks 30 times.

LakeWalesNews.net will update details of the precise schedule and location of the December 16 Championship game in Fort Lauderdale, as well as carrying up-to-the-minute updates during the game for those following from home.