This dramatic video shows the complex and dangerous process for building and dismantling a 54-person canopy stack. The world-record 100-person formation was created over Lake Wales Airport in 2007.

A team of skydivers from a dozen nations cooperated to build canopy stacks of a 54 and 65 persons at Lake Wales Airport this week while descending from well above 10,000 feet. The 65-person stack was the largest achieved since the current world record of 100 canopies was set in 2007, also at Lake Wales Airport. 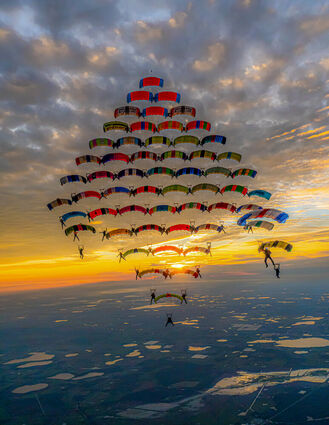 Acrobatic skydivers from 12 different nations combined to create 54 and 65 canopy stacks over the holiday week at Lake Wales Airport. The canopy stacks were detected by radar from as far away as Miami air traffic control.

The huge canopy stack, measuring almost 300 feet tall, was detected by radar from 200 miles away.

This week the "Freeze Your Buns Off Boogie" is offering acrobatic skydivers an opportunity to practice their sport during the winter months. The temperatures at high altitude are much colder than those on the ground, where Christmas morning temperatures in the Lake Wales area were near freezing or even below.